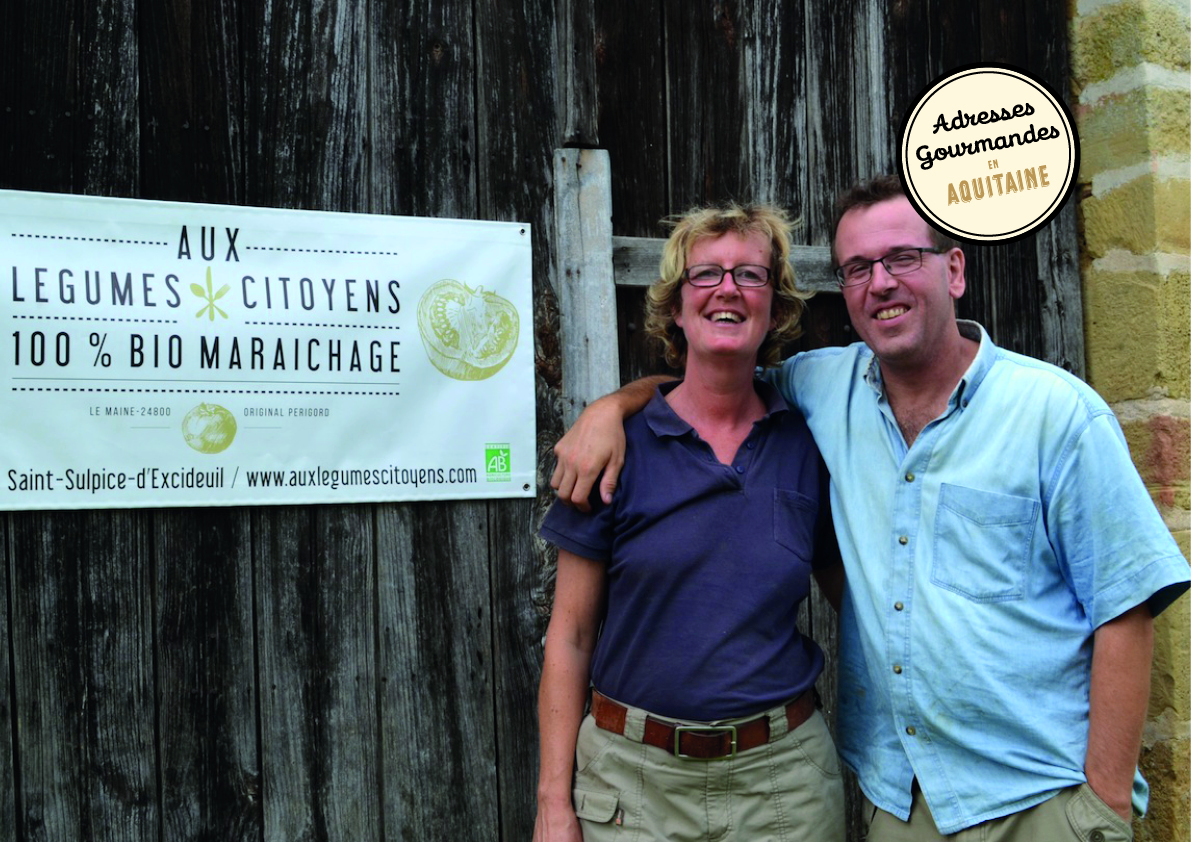 From IT to market gardening
By Suzanne Boireau-Tartarat

Fellow countrymen, take up vegetables! That’s how market farmers demonstrate their activism! Bénédicte Nicolas left her job as an IT consultant in Belgium to breathe new life into a small propriety in the Haut-Périgord. It was quite the undertaking. She really looked at the land in a way that farmers rarely do anymore. Bernard was still splitting his time between Brussels and Saint-Sulpice d’Excideuil before leaving behind the world of finance and joining his wife in an ideal of life that became a reality.

They fell in love with the Périgord region back in 2009. ‘We just wanted a house in the country that we would renovate ourselves.’ At that time, Bénédicte was an IT consultant in the environment sector for the EU institutions. ‘It was a first step that helped me discover the countryside. I had trouble going back to the city and I ended up wanting to change lifestyle.’ After a lot of reading and meeting up with people, she became a vegetarian, and decided to pursue training on Philippe Desbrosses’ Sainte-Marthe Farm in Sologne, renowned for organic agriculture. ‘It was a three-month break in my career. After that, I told Bernard that I wouldn’t be going back to my job.’ He was happy to drop everything and follow her, but it was impossible to obtain land around Brussels.

The idea of setting up their farm in the Périgord then popped up. Bernard had three children from a previous marriage, he made arrangements and chose to go back and forth each week. He joined Bénédicte full time after opting for this ‘chosen constraint’. Bénédicte started her first season of production in 2013.

‘The land had not been worked for five years and as such I was able to start straight away with organic farming.’ Intensive market farming over a small surface, manageable for one person without a tractor. ‘I prepare the land properly so that the plant can then get by on its own, and I add vegetable slurry. I am busier from March to mid-June growing seeds: the opposite of intensive farming which destroys the soil and makes it necessary to feed the plant.’

Mulching reduces the need to weed and keeps the humidity. The diversity of crops, fruit trees, hedges, dead wood and the huge array of insects all help with this integrated management. It’s good farming sense! And pleasingly simple, a principle dear to the French writer and environmentalist Pierre Rabhi.
Inspired by the theories expounded by the Québécois farmer Jean-Martin Fortier, Bénédicte and Bernard know that a small piece of land is viable by focusing on mixing, organising and rotating crops. Without machines, but with a well and rainwater tanks, they grow 2 to 3 tonnes of vegetables in 1,500 m2 of land.

‘Our farmer friends have seen that we are preserving the spirit of this farm. When I started, an elderly man told me when he saw me bent over with my soil decompactor: ‘People like you are a rare sight nowadays!’ I knew he appreciated my work.’

So, why are city dwellers, who have a degree, a guarantee of a good situation in life, getting involved like this? ‘It’s the result of a long process of no longer wanting to be part of a society that destroys the environment as much as humans do.’ It’s a belief that has given the project its name. ‘We are all fellow countrymen; we are responsible for our choices when we buy things. Like Pierre Rabhi, I believe in leading by example rather than by words.’ This process, however, took time to become a reality, based on a lot of reading and theories. ‘Manuals inspired us, but the experience in the field is irreplaceable.’ The seasons go by without ever resembling one another. Bénédicte has been pleasantly surprised by the small difference between what she imagined and the reality.

‘Newcomers to farming bring other methods to this field thanks to their prior experience ‘in my case, it was the Internet, and for Bernard it was calculating cost effectiveness.’

A logic of producing less and adopting a stance of voluntary simplicity
To be able to spend as much time as possible working her land, Bénédicte organised herself: she emailed her mailing list and customers place their orders based on the vegetables available. They then collect their goods from the farm on Friday evening. ‘I also deliver within a 10 km radius or to a collection point in the commune of Thiviers. Our approach is to have a short supply chain and to have contacts in the field.’ With 35 types of vegetables, 16 varieties of which are dedicated solely to tomatoes, some right up until November, Bénédicte buys rustic varieties, from the network of farmer seeds.

‘I’m on the lookout for unusual varieties and tastes.’

A member of the organic farming development association Agrobio Périgord, she is also involved in its work. She would like to be able to offer educational sessions to raise people’s awareness, explain the cycle of vegetables, show the amount of work put in by people and what makes it a fair price. She also wants to develop her range of fine foods. ‘We sell around twenty types of chutneys, preserves, coulis and spreads at the same as our vegetables.’ 100% vegetarian and organic, with no a certification, to have more flexibility.

Starting a new life and continuing to learn, remaining humble in the face of the force of nature, freeing up her mind about the ‘I grow, therefore I think’mindset, through active meditation, Bénédicte revels in the energy exchanged with the land. For her, it’s a lifestyle, rhythm and quality of life that are priceless. ‘If I worked to earn money, I would have stayed in Brussels. My friends say that I am courageous, but I think they are the one who are courageous to stay!’

An article produced as part of the Gourmet Addresses app