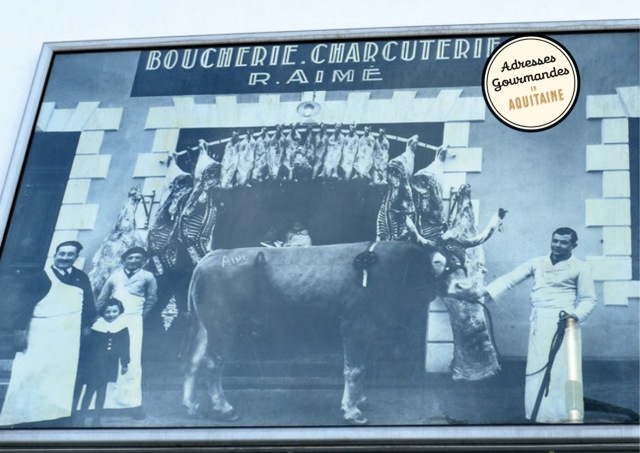 From head to tail
By Laure Espieu

In the pastures of the Landes, at the heart of a land with a gastronomic tradition, the rolling hills covered with succulent grass produce a tasty red meat. For three generations now, the Aimé family has been proudly watching over this heritage and continues the savoir-faire of artisan butchers. Cathy, the daughter, took over the business in Dax.

She takes you by the arm to comment on the many family photos. Faded photos decorate the butcher’s shop, the offices behind the store and mostly likely too a good part of the family home upstairs. It starts with an impressive line-up of rumps, immortalised in a close-up shot. ‘That’s how we judge a cow,’ our host explained. The hind quarters need to be deep and broad,’ Cathy insisted, her gestures accompanying her words. We then leave the building to admire a huge black and white photo on the frontage. Men with spotless aprons, right down to their feet, stood proudly either side of a piece of beef, with a flock of game birds displayed above their heads, as if a garland. You can see Raymond and Madeleine Aimé, the grandparents, posing in front of the same shop front that’s there today.

From the cowshed to the market stall
If Cathy Aimé is keeping the family heritage going, it’s because it’s a company established in 1927. Unsurprisingly, it’s deep-rooted. The last of her siblings, with three older brothers before her, travelling was more her thing. A travel professional, sailing between Jamaica, Spain and London, she wasn’t really a born butcher. That was until her father passed away suddenly from a stroke ten years ago. ‘Suddenly it seemed impossible to me to sell up shop. So, I told myself: I’m going to try. I returned to Dax, and I plunged straight in.’She said she wasn’t prepared for it. Managing 16 employees, supervising purchases and routine tasks, finding new customers, while being in the kitchen to prepare delicious dishes that would be delivered to the elderly…it was a lot of work. However, she said that magnificent animals were being reared around her in this exceptional land, and that it’s now her business to protect this savoir-faire and to keep the tradition going.

The designation Bœuf de Chalosse (Chalosse beef), awarded a Label Rouge and a Protected Geographical Indication (P.G.I.), was created by her father, Michel Aimé. With a handful of passionate breeders, they created an association designed to promote these remarkable animals. It now groups together 380 producers, and this meat is only sold in artisan butcher shops. Cathy perpetuates the philosophy: high-quality beef, selected directly from the fields, which her team will work on to achieve an optimal taste. To do so, the meat must be allowed to age for three weeks. It needs to mature on the carcass to become more tender until it is ready to be cut up. Then, there’s the customer service side of things, the last link in a chain of excellence.

‘Our role is to sell animals from head to tail,’ Cathy Aimé stated. ‘By helping customers have a better understanding of meat, helping them to choose that meat, and giving them advice about how to store it, cook it and what to accompany it with, that’s how we ensure they are going to enjoy eating it.’

It’s quite the art, and one that she’s been in since a tender age.

Sitting on a deli butcher’s knees
On the fireplace, to the rear of the store, Cathy Aimé picks up a book, once again flipping through photos. You can see Michel, her father, with several famous chefs. The company has many prestigious restaurants amongst its client base: Le Georges V, La Tour d’argent and the Crown Plaza. ‘My father was very enterprising. He fought hard for the profession, but above all, he was a real gourmet,’ his daughter indicated. ‘From very early on, we were initiated in the pleasures of eating and we shared that with the employees. They ate with us, and I often watched the TV on the deli butcher’s knees.’

This family atmosphere has stood the test of the constant growth of the business. Blessed with a mother with a broad world-view, Michel was sent to study in a Swiss German-speaking school. Upon his return, he was bilingual, which proved a real plus given the influx of German customers on the Landais coast. The family has had a permanent stand in the covered market of Capbreton for 56 years. The business then grew to the wholesale and quasi-wholesale markets with restaurants and local authorities placing their orders. ‘There are quite a lot of children who eat Bœuf de Chalosse, and I think that it’s great that they have local products,’ Cathy Aimé said contentedly. Yet another new store opened its doors recently in the centre of Dax, where you can find Cathy behind the counter every Sunday morning. And when Cathy relaxes, she does so at the table with, you guessed it, a good piece of meat and a glass of wine!