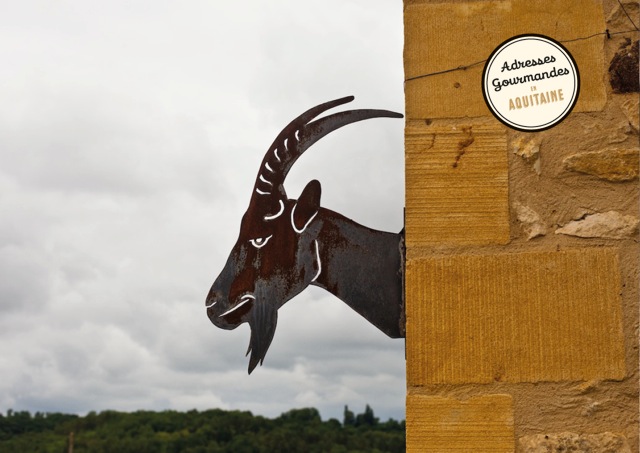 Martine at the farm
By Guélia Pevzner

Martine is from Belgium, the Périgord is not where she was born. ‘It was brave of you to follow the son of a farmer without knowing anything about the countryside or goats!’ She smiled. Forty-five years have gone by since, the children have grown up and her husband has passed away, but this countryside has adopted her just as she has adopted the regional accent and its spirit. It has to be said that the location is magical, what with the calm village of Carves that appears at the turn of the small road between fields and groves.

The couple’s three children, Martin, Jérôme and Caroline, all involved in the farm business, don’t want to leave either. The oldest deals with sales, the second son takes care the land and Caroline handles the dairy. Together, they started up visits to the farm, produced a small film about the business, and hold cheese tasters and cheese sales. With 150 litres of milk a day, the selection is vast: fresh cheese, firm cheese, semi-firm cheese, as well as the Tomme cheese that Caroline, who is clearly passionate about the goat business, started to produce three years ago. Everything is produced directly on site in the farm and is sold in the store that is adjacent to the house. The various types of Bortolin cheese can also be found at two AMAPs (local produce box scheme) and a farm shop in Siorac, five kilometres from the farm. Neither Martine nor her children are thinking about expanding. In their opinion, the farm needs to remain on a human scale.

Cabécou de Périgord soft cheese
What about the Cabécou cheese? ‘Of course we produce this cheese, but for us, it’s a cheese like any other that leaves our laboratory. That name isn’t a commercial designation, it corresponds to our semi-firm cheese with seven days of maturing.’ The Bortolin family didn’t want to be involved in creating a brand or using one of the cooperative logos that exist in the region. Martine has her own label, the reputation of her cheese, based on the many awards earned in local competitions, is passed on by word of mouth. Cheese lovers don’t hesitate to go to Carves to find whatever they want.

With its creamy texture, its cream-coloured, slightly yellow crust, this small round cheese made from raw milk is 50-55 mm is diameter and weighs 30 to 40 grams. When it’s reached it prime, the cheese has a pleasant hazelnut aroma, which becomes more pronounced over time. ‘It’s all the rage at the moment. When I ask my customers how they cook it, it’s often served warm on toast or in a salad. But it’s just as good as an appetiser, with a little local honey or preserved nuts. And, of course, on a platter of cheese!’

The goat farm
We head to the goat enclosure. Through the back door of this old wooden building, you can see the neighbouring fields. Martine has 22 hectares of cereal crops, ‘the whole lot is for the animals’, and 2 hectares of pasture in which ‘they can play around’. Martine’s ‘friends’who she knows by name, however, prefer to stay with us inside, rushing towards their mistress. An alpine race, their fleece is a pretty brown and beige. ‘I remember the time when we had just ten, now there’s more than fifty of them!’ Martine strokes an old goat who follows her wherever she goes. ‘How about a photo of us? Take a photo with that goat, she’s a cutie, she loves having photos taken of her!’