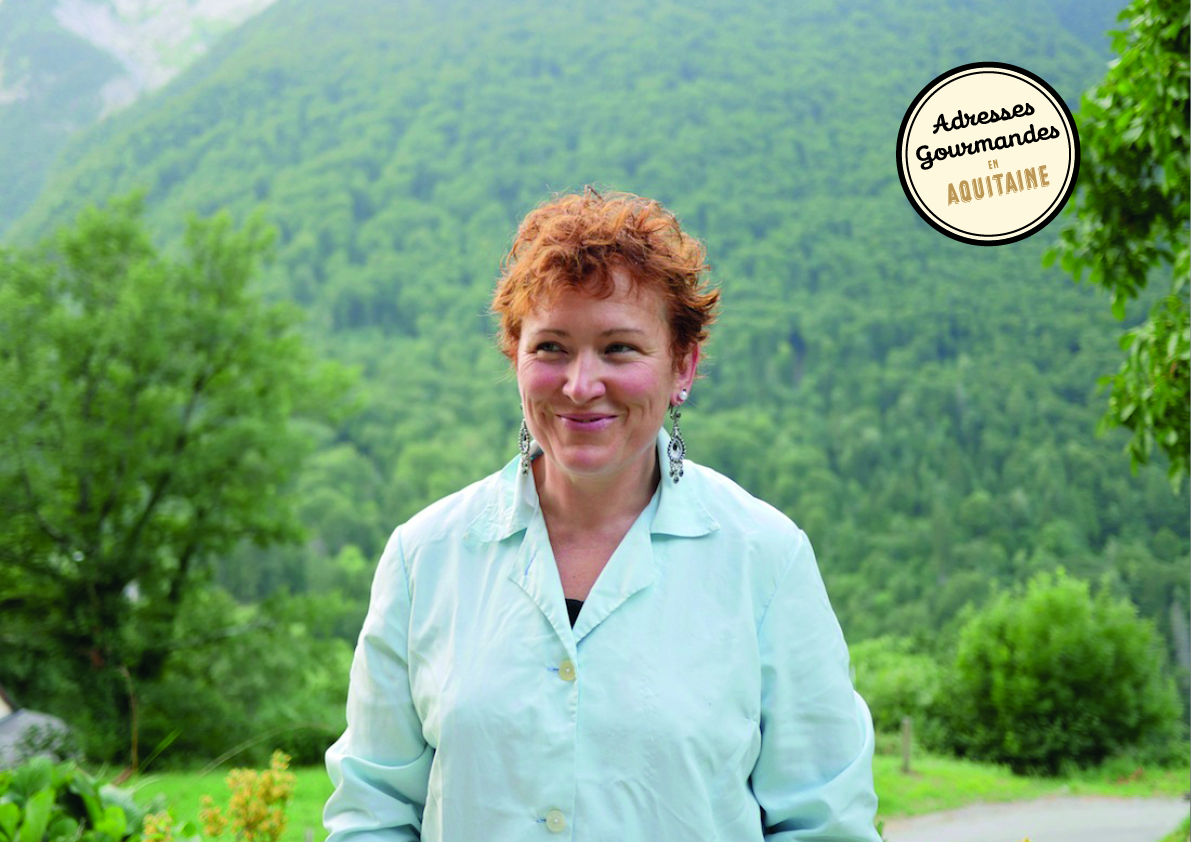 You could consider her as a bit eccentric, but you need only talk with this woman of conviction to understand that Christine Arripe’s cheese creations are a true innovation. Diversifying, proposing new products, finding new outlet for her sheep’s milk and her meat (lamb, ewe, veal), while remaining a small-scale farmer, that’s the challenge that this surprising shepherdess has given herself.

With deep green eyes, a warm smile and discrete elegance, Christine Arripe is not your stereotypical shepherdess. It’s not really all that surprising. Before going into the sheep business, Christine’s first career was in accountancy. ‘I was starting to get a bit bored among all those numbers when my husband took over his parents’ cattle farming business. As he was very involved in the farm and I wanted us to continue to spend time together, I didn’t really have the choice. And then I wanted to stay in the area.’ That area for Christine was Eaux-Bonnes because of her father, a former carpenter-joiner, and the Aspe Valley because of her mother, formerly a shopkeeper. With such origins, Christine was not ‘from the profession’, as the saying goes among shepherds.

Despite that, she threw herself into the profession, she didn’t just get into it, and she headed a very small herd: 60 dairy sheep, whereas most shepherds have herds of 300 to 400 sheep. She placed her Basco-Béarnaise sheep not too far away from her husband’s Blondes d’Aquitaine cows, on the mountain side of the green mountain that became the name of the farm, in the small village of Aas known for its whistling shepherds. With a certificate in vocational proficiency in agriculture in hand, she went through a somewhat difficult start what with the manual milking in which she didn’t have the right technique, ‘I was scared of hurting them,’ herding the flock to the mountain pastures when the warm, sunny days had arrived. ‘It took me time to learn how to control my sheep’and producing cheese.

A taste for creation
Over time, she got the hang of things, even though the financial stability of the farm continues to be shaky. ‘Right now, I have 90 sheep, I would need more to be able to make a living out of it, but I don’t have the forage area to feed them.’It’s a headache that Christine has tried to solve by setting up a guest house and table d’hôtes business in parallel, while her husband works on the ski lifts at the nearby Gourette ski resort in the winter. It was while she was thinking about how best to draw up her menu that she came up with the idea of providing her guests with a cheese platter that was produced entirely from the good milk produced by her Basco-Béarnaise sheep. Whereas up until then Christine only produced sheep’s milk Tomme cheese, she started to produce a dairy dessert: dulce de leche. ‘My grandmother lived in Argentina, I took her dulce de leche recipe that she made when I was little.’

Then came the faisselle fresh cheese which, once drained, can be eaten with Espelette pepper, fresh herbs or onion marmalade. She had the dessert, the starter, the only thing missing was the appetiser. She came up with ‘Fétasse’, a feta made with Pyrenees sheep’s milk, marinated in olive oil and spices. It’s delicious, especially if you have the patience to allow it to mature over a few months. When eaten plain, Christine’s feta can also be used just as well in hot dishes. ‘Every year I innovate and create a new product,’the energetic and enigmatic shepherdess summed up. ‘In 2013, I decided to make Reblossau, a type of sheep’s milk Reblochon cheese and in 2015, I moved onto Camembert. People were surprised. When they come here to buy cheese, they think they are only going to find Tomme cheese, they try a bit of everything and often go home with a platter of cheese!’

On the hunt for the elusive blue cheese
In 2014, the green mountain’s creative mind decided to make a blue cheese. It was delicious. The only problem being, she has never been able to reproduce it: ‘When I innovate and try things out, I don’t note anything down, I often go with my instincts…’ Maybe one day Christine will find the way back to that elusive blue in the midst of her pots, cauldrons and moulds. Until then, Christine’s cheese innovations represent 50% of her produce. The rest is split between the traditional Tomme cheese and the mountain pasture cheese that she produces during the summer when her sheep graze high up on the Gourette mountain plateau. In addition to the pleasure of innovating, there are also financial reasons that pushed her down the path of diversification: ‘When the milk crisis hit, I told myself that I could transform the milk into cheese.’

‘Dulce de leche or the faisselle cheese don’t need to be matured and, at any rate, I don’t have enough space in my tiny salting room. They sell like hotcakes, which generates cash. That’s the former accountant in me speaking! ’she said mischievously. The same goes for her cull ewes (who no longer lamb as they are too old).’The thought of them going to the slaughterhouse for a cut price doesn’t appeal to me. I prefer to get greater added value by making patés and other products.’ As for her 25 Blondes d’Aquitaine cows, she has started to sell the calves directly to customers and would like to be able to transform them into tasty little dishes… Christine doesn’t lack in energy, even if she gets discouraged at times. Not being from the profession, being a woman, driving a business and innovating is not easy in the Béarn, just like elsewhere.