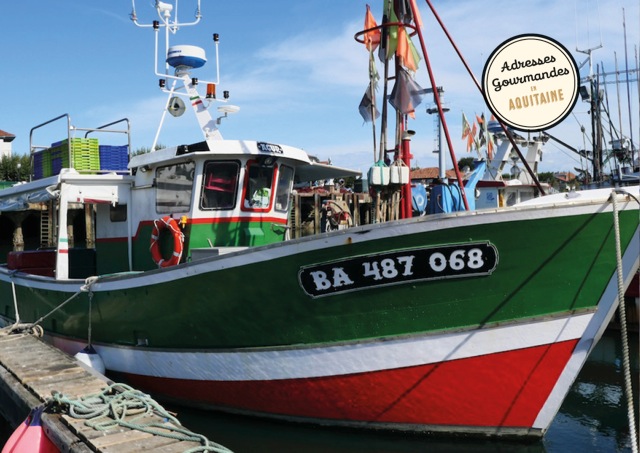 Christophe Inda catches hake in a traditional manner from the small port of Saint-Jean-de-Luz, fishing exclusively by line fishing. It’s a traditional technique that is an alternative to trawling or casting nets. On the Agur, accompanied by his Labrador and two sailors, he leaves during the day to the Gulf of Capbreton, bringing back fish with a guaranteed origin and freshness.

Agur, is the name of Christophe Inda’s fishing boat, and it means ‘Hello’ in Basque. When he climbed aboard the Agur for the first time, Christophe was six years old and the boat was brand new. The little boy back then was joining his father, a fisherman, for the first time on a fishing trip. Four decades later, the Agur has aged a bit, Christophe too, but the lineage of this traditional craft has never been broken. ‘My grandfather, father and uncles were fishermen here in Saint-Jean-de-Luz. I was born into it,’ Christophe stated, rattling off the ready-made path of his career that seemed the obvious choice: school of fisheries at 14 years of age, ‘the equivalent of vocational training qualification’, navigating a boat as a sailor at 17, followed by ‘skipper school to be able to command a ship’. At 21 years of age, he took over the helm of the Agur. ‘Since then, I haven’t changed a thing, I’ve modernised it and done a lot of upkeep. The boat’s made of wood, and wood requires a lot of care and attention.’

When asked why he hasn’t changed a thing over all those years, Christophe replies with his sing-song Basque accept: ‘It’s enough for me. I know it through and through: I’ve spent more of my life on this boat than on land!’ The fishing skipper and his boat, two inseparable companions that the wails of modernisation and the race to equip, have been unable to separate: ‘Of course there are more efficient solutions, but it’s enough for me. Most of the shiny new boats have resulted in bankruptcy. I’m not interested in one-upmanship. I work, that’s for sure, but I also want to enjoy life.’ For Christophe, making the most of life is, for example, to offer his only son Thomas, now a teenager, a fantastic trip every year. This year, it will be Colombia. For the remainder of his time, he fishes, fishes and fishes a bit more.

The man who loved the sea and beautiful fish
Mainly line-caught hake from Saint-Jean-de-Luz. So why ‘line-caught hake from Saint-Jean’? After all, isn’t the European hake (Merluccius merluccius) that relatively common fish on the French Atlantic and Mediterranean coastlines, sometimes called merluchon in French when it is small in size? So far, nothing to write home about. What makes line -caught hake from Saint-Jean-de-Luz unique, is how it is caught (by line fishing and during the day) and where it is caught (the Capbreton trench in the Bay of Biscay). It’s a two-and-a-half-hour journey to get there, and just as much to come back. Christophe boards his little 11-metre long boat with his most faithful companion, his Labrador, and a small crew. They leave at 3 am. It’s dark. ‘I love the sea. I can’t live without it. My favourite moment is night-time. My crew is sleeping, and I’m all alone with my dog. I am at peace.’ At peace, that is, until the longlines are prepared. It’s an impressive technique to put 1,800 to 3,000 hooks, baited with nice, fresh sardines, into the water in record time. Christophe loves fish caught in this manner: ‘The fish is beautiful, it’s alive when we pull it up to the surface, it has not suffocated, is undamaged, and has not been drowned.’ It’s true that these hake are superb: their scales are shiny, they have round eyes and firm flesh.

Return to red tuna
When the hake season from April to September comes to an end, Christophe catches tuna. After years of bans and quotas, he once again obtained a licence to catch tuna in 2015. In this case again, he baits the red tuna using line fishing. He loves this method of fishing by day which allows him to be at home every day and to sell his fish as of the next morning. Since 2011, he has been selling part of his catch directly on the port of Ciboure. When sold directly, hake can be purchased for around 10€/kg, and the sliced tuna fetches around 21€/kg. There are few people who have gone for this type of sale; most fishermen deliver the entirety of their catch to the fish market or to restaurant owners. ‘It’s a profession of passion, otherwise you wouldn’t be able to do it. You don’t always make a living, you’re tired, there are constraints, but it’s a profession that I love,’ Christophe concluded, looking at his son who wants to become a physiotherapist. ‘He’s right to look into another profession. He can come back to fishing afterwards if he wants.’ And, provided that the Agur continues to hold firm against the tides, of course.