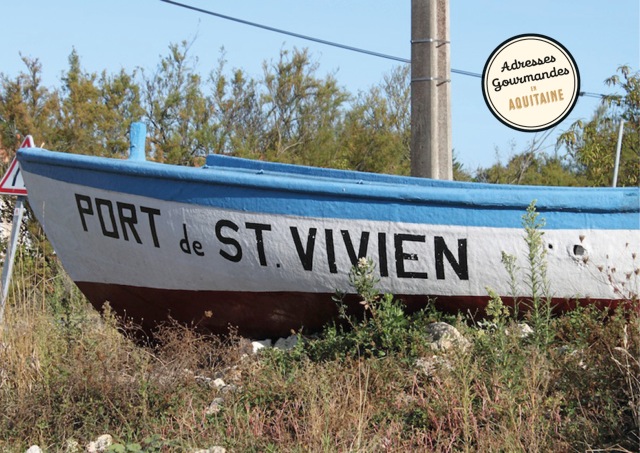 Bertrand Lung, a landsman by the sea
By Ariane Puccini

Médoc gambas prawns aka penaeus japonicus, is at Bertrand Lung’s, the queen of the marshland salt pans, in the north of Médoc where it roams the waters that he cares for with love. Neither too salty, nor too sweet, ideally rich in phytoplankton, the basins are also home to a proliferation of clams, esquires -the Gascon crayfish- eels and crabs. And since last year the Eau-Médoc Farm has been raising oysters, bringing back a tradition, in line with today’s tastes, that has been prohibited for the last 30 years in the Gironde estuary It is a passion that the producer gladly shares during the guided visit to his fish farm, where he sells his produce directly.

‘I like to talk a lot.’ Bertrand Lung prefers to warn his listeners: when it is to do with his salt marshes the man is tireless. ‘In those days, launching this venture I had to be a bit crazy’, he acknowledges today with a laugh. An excellent madness launched 26 years ago on a spit of Medoc polder, those arable lands gained from the waters of the Gironde estuary. You had to be a bit ‘crazy’ to imagine that these alluvial lands recovered from the rich silt deposited by the marshes, producing such a fertile soil, could be put to any use other than agriculture. And yet Bertrand Lung literally fell in love with this plot which he applied himself to digging and shaping it to install the basin for his fish farm. In the nineteen eighties, as a young man, he had taken part in a training scheme working on the first attempts at farming prawns in Verdon-sur-Mer. Since then, he has never left this part of France apart from a two-year hiatus which he spent in Africa. In 1989, he returned, having decided to set up his business here.

His extraordinary ‘garden’
‘I yearned for the sea’, he recalls. However, this Nancy native who has many farmers in his family tree did not want to completely relinquish working on the land. The marshland ‘which is made like a garden’, humbly claims the fish farmer referring to the 17 hectares where he works, seems to provide the ideal compromise for him. In the basins carved out of the watertight clay, Bertrand Lung first wanted to grow estuary oysters. Prohibited for many years because of the port facilities at Verdon sur mer, right at the end of the Medoc point, oyster farming in the estuary had been authorised once again, when Bertrand Lung decided to set up his enterprise.

As a lover of this shellfish himself, he hoped that the activity would bring in a good living, and give him time to launch a Medoc prawns fishery which in the early 80s was also still very much a struggling venture. But due to cadmium pollution in the waters of the Garonne, he had to confine himself to farming the Medoc prawns. Since then he tirelessly works the marshlands. The man never seems to tire of the alchemy worked by the basins that he checks daily, that mix of fresh rainwater and the rich salty water of the estuary that fill the basins. Bertrand Lung is indefatigable as he watches over his basins, even at night when he has to fish the capricious and demanding penaeus japonicus which only comes up when the stars are out. He lives in a little house, set between two basins just behind the shop, where he processes and sells his products directly.

David or nothing
Bertrand Lung is master of all he surveys and he takes great pains to guard his independence. When he was younger, he got an HND for food marketing under his belt. ‘I learned the techniques for killing off farmers’, he says with a wry smile. Since then he has told himself to keep a distance from mass distributors who ‘in the early years build golden bridges to the producers and buy more and more until they have 50 or 60% of your production’. Bertrand Lung does not want to be duped: ‘Then one day, they start to decide the prices.’ He is also wary of the mirage of growing his SME.

‘In the agrofoods industry you need to be either very big or very small. For a medium sized enterprise, it is difficult’, holds someone who chose to be David rather than Goliath.‘I didn’t have 50 solutions, either I accepted deals or I managed to produce less, but would still be able to put a value on it myself’, he comments candidly. Exit central buyers or even wedding caterers. No one else except end customers and his 3 to 5 employees per year are allowed to go near his shellfish and prawns, However, Bertrand Lung’s reluctance to expand his business has not stopped him from launching new ventures. The latest to date: the return of oyster cultivation in the basins of the Gironde estuary has once more been authorised after a 25-year prohibition.