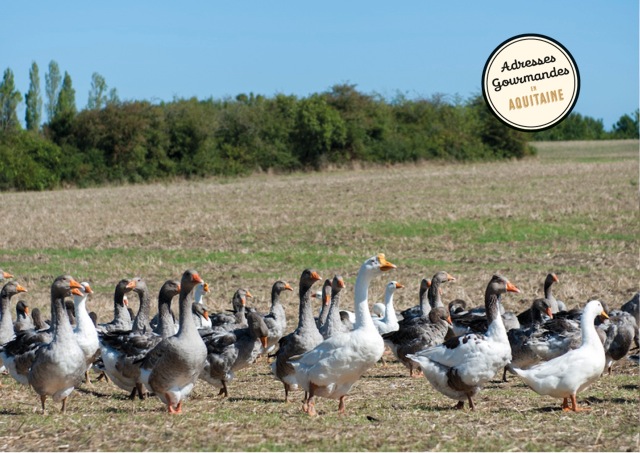 The kingdom of geese
By Emilie Dubrul

On the wooded slopes of the Haut Agenais, between the bastides de Monflanquin and Monpazier, Christine Daulan Pommier rears her free-range ducks and geese. Along the path, prettily lined with natural hedgerows the farmer shares her passion with us and shows us how she works ‘respecting both the environment and the animals and ensuring the quality of good products that come from the land’.

‘Here, the goose reigns supreme’ announces one of the first signs posted along the Discovery Trail. Armed with a little leaflet, the 45-minute walk looks like it will be fun and very informative: observation tables, riddles and some ‘caught red-handed’ signs. It is an outdoor version of the game of Goose (French snakes and ladders) that Christine Daulan Pommier has thought up for her farm. In the distance, in the middle of a vast grassy meadow where wild mint grows, the flock of geese is walking in serried ranks happily honking as they go. ‘Above all, forget all the clichés. Geese are lovely birds, nothing like their grumpy and aggressive image. It is a flock animal, with a gregarious instinct, curious and extremely sociable, and it is easily domesticated. This is clear when you have to move a group from one place to another’ says Christine who is head of the farm and an anatidae species specialist.

In another life, Christine was a chemist with the CNRS, (National Scientific Research Centre) where she spent several years as a researcher. ‘That was 16 years ago. I was 32. It was my husband who decided to take up farming. He was the one who trained for it and in the end it’s me who is the one on the farm. It just happened like that. Quite naturally.’ When the couple bought the 18th-century farm, which had been abandoned for over twenty years, they had a huge renovation job on their hands, the house, the barns the tobacco drier, fences, hedges and copses, there was so much to do. Today, with their 17 hectares, 8 of these are under grass meadow and planted with cereals, and have been carefully managed around the buildings for the benefit of the poultry. The former stable now harbours a covered area for the geese, a space used for the cramming and Christine’s processing laboratory.

From sheep to poultry
At first, the couple decided to raise sheep, but in the end chose to keep geese and ducks. ‘One day our neighbours reminded us that ducks had always had a place in traditional Lot-et-Garonne farming, before they disappeared. In those days, if harvests were bad, the sale of foie gras and confit brought in a little money at the end of the year. The provided us with our first eight geese then they taught us the traditional cramming technique. The following year our first batch of goslings arrived. In retrospect, it was a good choice as our geese are perfectly adapted to this sloping terrain.’

Organic smorgasbord
On the Thoumaze farm there are several species of goose. Christine raises Toulouse and Landes geese for foie gras, white geese for their delicious meat. There are also some Chinese, Rhineland and Egyptian geese who act as nannies in the farmyard. In Spring, they take the newly arrived goslings under their wing, teaching them and protecting them from birds of prey. The farm produces around 150 geese and 200 ducks, which live free-range all year round. ‘Our geese, from the age of two weeks, to the time that they are crammed, are raised on the farm. What they like is having plenty of space, green plants, water and as much cereal as they want. Mostly they eat meadow grass which is grown specially for them and cereals all of which we grow except for the maize. Geese and ducks need to peck, to scratch the earth, which is why they are free-range’ Naturally selective about their food, geese are natural weeding machines. There are no pesticides or herbicides here. They do all the work. ‘These are ideal conditions for them to grow well and ensure good quality meat.’

Cramming, the ‘gavage’ is a natural seasonal requirement
The visit continues in the workshop. On Christine’s farm the cramming is done in the old way, by hand, and in accordance with the animal’s biological cycle, from the start of autumn until the end of spring. For a migratory bird, cramming is natural and instinctive. Even though a domestic goose no longer migrates, it has nevertheless inherited this need, and the capacity to fatten up, from its grey goose ancestors. ‘From the end of August, the days become shorter, the nights are cooler and it becomes clear that the feeders are emptying twice as quickly as normal, continues Christine. The geese have an internal clock which tells them that autumn is on its way and with it the time to migrate. In fact, the physiological process clicks in. Although our animals have been domesticated, they nevertheless still retain the need to create reserves.’

At the end of September, beginning of October, the new geese are now 4 months old, that is they are adults. When the physiological process has set in, the cramming sessions begin: In batches of 45, the first birds will choose their residence in the shelter of the barn. For 4 weeks, with 3 daily sessions, they are fed a privileged diet, rich in fats and starch, ideal for transforming their liver. ‘The maize that we use is an old variety which produces less maize grains, but is ideal for traditional cramming.’ A variety that has a small round grain that Christine first rehydrates, then warms so that it will slip easily down the gullet with no risk of hurting the animal. ‘After gently massaging the neck to make the grains go down to the gizzard, the geese, free to move once more can take a digestive after dinner stroll if they want’ she continues smiling.

Nothing is wasted, everything is used
After 4 weeks, the liver will be well developed and Christine then proceeds to slaughter. ‘It is not the easiest period of the year but it has to be done’ she confesses almost under her breath. Then it is the processing stage. ‘Processing needs to be done on the same day as slaughtering, as the liver is a fragile product. Once the livers have been prepared, I season them with salt and pepper and can them in glass jars. That is what we call foie gras entier, the whole liver whereas foie gras is simply several pieces of liver preserved in a recipient.’ And don’t even mention in her hearing blocks of foie gras invented by industrial processors! ‘With the leftovers, I make pâtés, rillettes, and stuff the necks. With a green salad they are delicious!’ The next day it is the turn of the carcass to be put in the pot. The meat will be minced and the fat melted so that the best parts of the goose or duck can be cooked in confit. ‘If they are going to have the denomination of Confits, the animal should have been used for foie gras and the meat should be salted, as this extracts the meat juice and gives it that special taste and texture.’ Foies gras entiers, magrets, salmis, axoas, sausages; so many products cooked in accordance with the state of the art, for which this superb farm, faithful to the old tried and trusted ways, has become renowned.