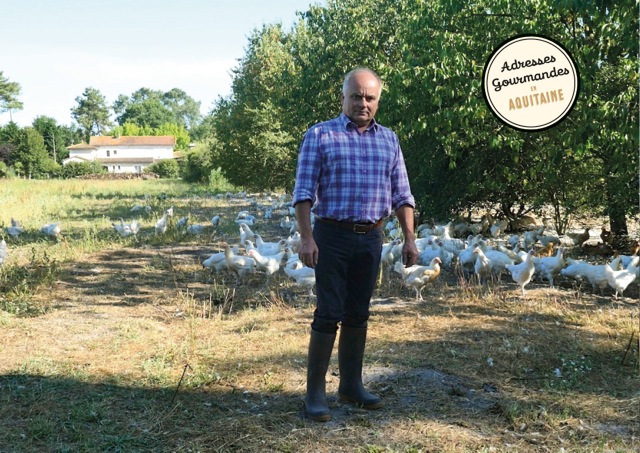 The poultry man who thinks big
By Sonia Moumen

Vertessec Farm. In the heart of the Medoc vineyards. It is here between the Girondine Lande and the prestigious vines that, Michel Petit, has been raising his poultry since 1973. He is not a big man, but that is not important because he thinks big. And size for him is not a question of quantity. He leaves quantity to others. He is concerned with quality.

You only have to wander around the charming little shop and stroll about his 50 hectares of Landes and forests to understand that quality is filtered through the prism of an almost obsessive attention to detail. Starting with the breeds of hen he has chosen. And you don’t have to tell Michel Petit,

‘It is not just because something is old that it is good’ he is fond of saying.

The ancient local breed of Gascon hen? His eyes narrow, with a hint of a challenge: ‘taste wise I would need convincing’. And as no other breed existed before in the Médoc – ‘apart from the wine, here there’s nothing’ –, Michel Petit has decided to organise his own breeding programme, crossing breeds and producing his own races that he has called the La Dorée de Vertessec and the Cousine de Vertessec.

With a roguish air, and a smile on his face, the boundlessly chatty man suddenly becomes silent, he is not planning to give away any secrets. The most we learn is that he has Limousin and bare necked Faverolles wandering his land. For the Faverolles, this poultry with its white meat comes from a small district of the same name in the Cantal, he is prepared to be more forthcoming: ‘It is known to be the most beautiful French breed and the best! People are not familiar with it here but if you are going to work with white meat, I prefer the Faverolles to the Bresse chicken.’ And straight away he follows with ‘Mind you I am not criticising!’.

Preserving the family spirit
He does not waste time criticising because Michel has enough to do with his 1200 to 1300 poultry that he slaughters every month. ‘We slaughter on site, on Tuesdays. We catch the animals at about 3 or 4 am. Then we begin at 7 am, and they are not stressed in any way. We draw the carcasses by hand. At the weekend the meat has rested and is relaxed’. For Vertessec Farm, it is a point of honour to maintain constant quality, which is why great chefs and faithful clients return to the farm. With his success, Michel Petit could well have lost a little of the family spirit that has permeated the land since 1620! Even if everything began as far as he was concerned in 1973.

He was 17 years old then. His parents had a forestry business, a few cows and some chickens. He could have followed suit or worked in the nearby powder factory, but he decided to strike out on his own and be independent: that business would be free-range poultry. A decision he took on his 17the birthday? Not quite, but by searching around a bit he finished by trusting in the fact that every year he raised a young chicken given to him by his grandmother, and he watched happily as the poulardes grew and ‘delivering the final blow’… ‘I started to think that I knew what I wanted to sell. My father told me that ‘if it is good, you only have to put a sign at the end of the lane and they’ll come’.

From traditional farming to high end processing
Over four decades later, the sign is still there, the French Culinary College has awarded the label of Artisan Quality Producer to Vertessec Farm and ten people now work on the farm, including Michel’s wife, his nephews and their son Alexandre. Alexandre, who has a diploma from Lenôtre, opened a shop in Paris in 2013 and introduced the top range processing of chickens, poulards, capons, ducks and other poultry, roasts, terrines, pâtés, foies gras, chicken drumsticks, ‘18 hours cooking! Nothing is added except for salt, pepper, a few spices. Magnificent!’.

‘My son has made his contribution just like I did back in the day. He reflects on the development of a range of products cooked fresh and sous vide and would like to return to the farming’. If the son has become a specialist in processing, the father claims to be the expert in fattening and finishing: ‘we try to ensure that the meat is marbled, that the fat penetrates the flesh. I can go up to 22 weeks raising the fowls, it depends, it is not set in stone!’. What is set in stone however is the way to eat the famous chicken, always on a Sunday. With the family. Oven roasted and surrounded by potatoes. And Michel Petit looks surprised: ‘How else would you eat it?’.