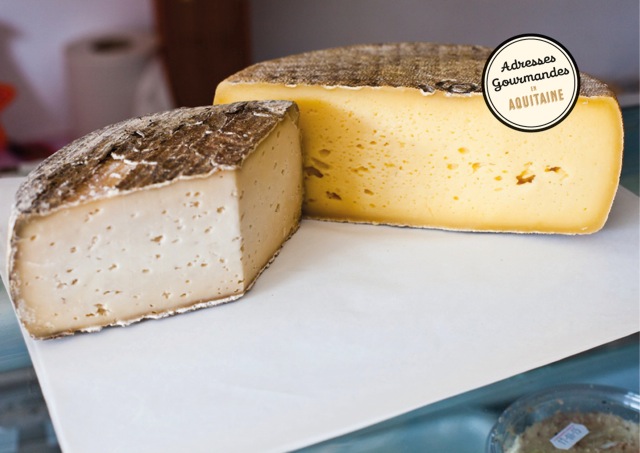 35 cows, 35 goats and 5 ha of land under cereal, production of fresh curd and whole cheeses, sweet and salted butter and a whole range of yoghurts, all produced on a human scale. Isabelle and Laurent Tite work with their three children. Laure started her business to continue developing her goat’s cheese business, Noëlle works as a basket maker and Albin has set up his beehives on the farm, which is completely organic. The processed milk: in conjunction with the Aquitaine Rare Breeds Conservation Society, the Jarouilles Farm is active in developing the ancient local breed of cow, the Bordelaise.

A curious little goat accompanies us as we take a walk around the farm. Laure Tite grabs her to return her to the pen. Goats are her speciality; she went into business for herself on her parents’ Isabelle and Laurent’s farm, in order to develop her goat’s milk dairy activity and produce her cheeses. Laura’s maternal grandparents bought the farm in the nineteen seventies. Now the three grandchildren are involved in the farming activities. Abel, Laure’s older brother whose daytime job is agricultural engineer in a vegetable seeds business, has installed beehives. Noelle, the youngest sister has chosen basketry, wicker work and making baskets. In the grandparents’ time it was just dairy production with the cows and some pigeon rearing for meat. Little by little, the number of cows increased, the Tites have been producing cheese since 2004, and the goat farm has been running since 2009. Moving on from its initial conventional production, the farm is now run organically.

In search of making a difference and developing
‘The nineteen seventies were years of self-assessment for local agriculture, Laure explains, we started to go organic as it was central to our beliefs and because it fitted with our production logic. My parents never rested on their laurels, they tried to adapt to the market in accordance with their beliefs. It has not always been easy, but they have no regrets. And they have handed down the farming gene, and an ability to question and reassess. It has always interested me, we were brought up in the spirit of trying to make a difference, to develop. We try to put our energies into doing everything in a friendly and family way.’

With a range of about thirty different products (cow and goat’s milk cheese, natural and fruit flavoured yoghurts, butter, etc.) the shop is open to customers every evening. You can also find their products in some AMAP and Bioocop organic outlets in the region. ‘We work directly with each shop, the fresh food counter managers send in their orders every week,explains Laure, we got involved with the AMAP and Biocoop from the start, in 2005, just after the cheese dairy was built. We were swept along on the crest of the wave.’ With five full time employees, two of whom are permanent staff (Jean-Claude has been with them for 25 years, and, Natasha for more than ten), the farm is not seeking to increase production which is stable and sufficient for the demand in terms of their type of marketing. For some time, the business has also worked on mass catering and the regional platform for local organic products ‘L’isle mange bio’, an association of Isle Valley producers. ‘It is a small network but it works quite well and we were active in setting it up.’

Along with the Aquitaine Rare Breeds Conservation Society
With their Montbéliardes and some Normandy cattle, the Tites were looking for a particular breed with a milk which was best adapted to the cheeses they wanted to make, which would be rich in fats and proteins. Finally, they settled on an ancient breed, once very popular in the region, the Bordelaise, which was then almost extinct with only a few head remaining. To revive the breed, they needed to develop the bulls, following a programme of artificial insemination and natural crossing with other types of cattle, all carried out with the guidance of the Aquitaine Rare Breeds Conservation Society. Jarouilles farm, with five or six other operations got down to business. Today the region can now boast around two hundred Bordelaise cows.

‘For the goats, we have an Alpine race, classic and extensively used, but I think that I may well go for a more local rural breed, the Poitevine!’ says Laure. ‘Our region is on the border of two local breeds, the Poitivine to the north and the Pyrenean in the south. I have tried the Pyrenean and I don’t get on with its temperament .’ Personally involved in the Country women’s Confederation Union (she is departmental joint secretary for the second year running), Laure closely follows any people who have projects, wanting to set up on their own. ‘There are young people setting up and ideas that come together, especially in market gardening Including a colleague who has set up an enterprise with a team of horses providing transport in the area, in particular to bring children here when we have open days on the farm.’ To meet the demand, Laure says. ‘phénoménale’, The Tites are developing this project to transport groups especially children and secondary school groups. ‘We feel that there is a need because the link with the land and farming comes from our culture, people want to bring it back.’