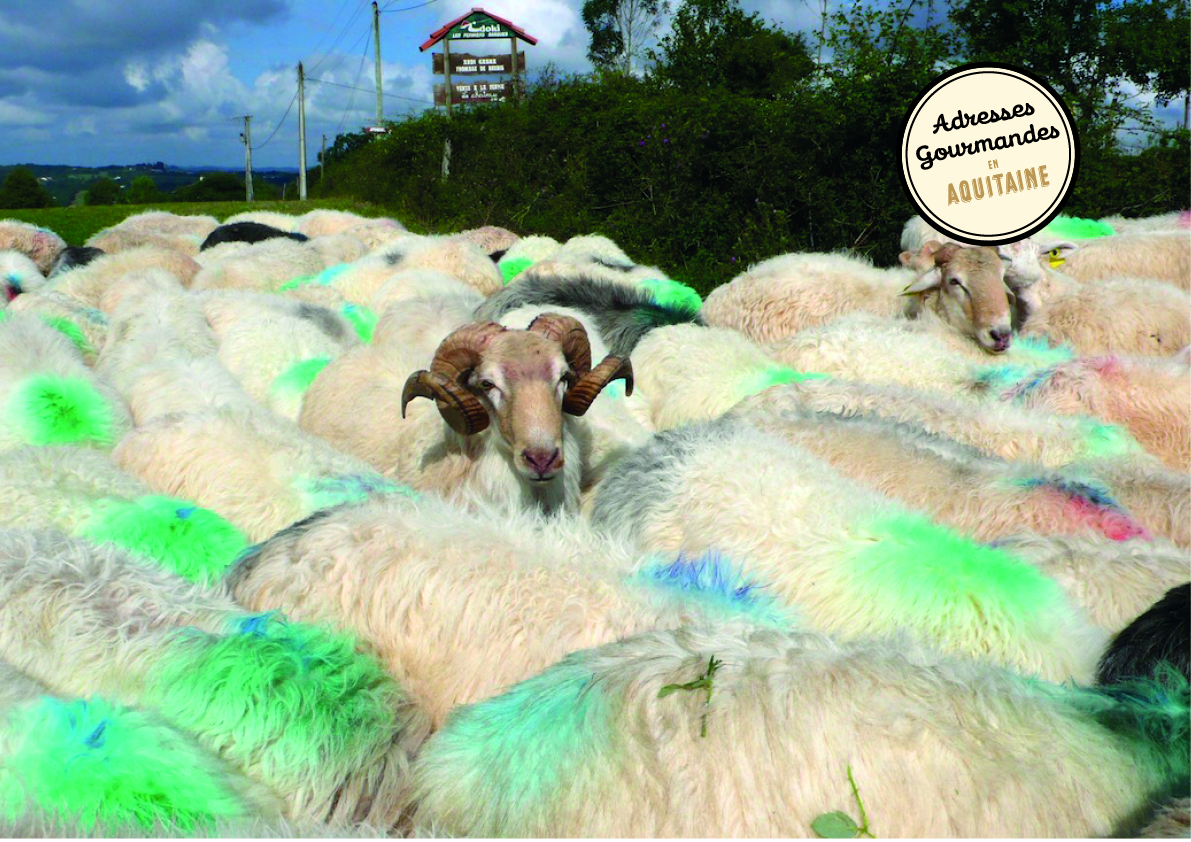 A château lifestyle
By Pierre Hivernat

Let’s begin with the château: there isn’t one. As to a château lifestyle, forget that as well. The only luxury here is the landscape, the valleys and the foothills of the Pyrenees, magnificent ewes waiting to be milked, or the ram, the dogs waiting around until called to do their job with a stray sheep, the wild kittens who are scarcely aware that they are supposed to be domesticated creatures, and Nino, Lison and Peio, Anne-Lise and Boris’ three children, who are in nature class all year round.

The sheep do not seem to appreciate the magnificent view

Seeing as there is no château way of life, could it be the local village festivities? Not really either, because for a Marseillaise and a Normandy native who learnt their craft in the Alps, taking on the mountain of Basque culture with the Ossau-Iraty cheese as their standard bearer is hardly going to be a walk in the park. But when you love someone, adversity can be what drives you and they have been in love for nine years now.

The GPS is having a lot of trouble finding the little track that leads to the farm, up in the hills at Passarou. In terms of architecture, nothing special, but the farm has a splendid location in its landscaped setting. At the Ferme du Château, you feel at home straight away and everyone waits patiently for their turn to be introduced, to get to the holy grail of the cheese store which can probably accommodate a maximum of one client who isn’t on the large side. There you can find the ’Ossau-Iraty cheese made with raw milk, Etxekoa ripened for 5 to 12 months according to the seasons and also a fragrant breuil (it is also called greuil or brousse) made from whey and which just needs a few chives or some basil to go with your tomatoes. You will also find some of their friends’ products, such as Itsas Mendi’s incredible Itxasou cherry jam.

The store can hold two or three, no more. They sell the farm’s products and those of a few friends who are also producers.

The 300 Manech ewes with their pretty russet heads, are grazing away in the field next door, as if the grass were about to be taken away any minute. It is impossible to imagine these animals being stressed, at any time and undoubtedly they calmly produce their milk which is bound to be a reflection of their environment. The same goes for the stabling where Boris works, the animals all have plenty of room and straw which smells so good to spread, even the winter must be warm and welcoming.

And yet in this paradise Anne-Lise and Boris do not seem to have the easiest of lives. First of all they took great care to send their children to the Basque school so that they will speak the language and teach it to their parents, integration is never quite managed, suspicion reigns, the syndrome of the black sheep or the scapegoat remains lurking in the background in conversation. Basque by adoption perhaps, but they will have to wait another few generations to earn the title.

As far as working conditions go, it is not a bed of roses either. The couple have invested about 400,000€ based on the owners’ promise that they would be able to acquire 44 hectares to farm. They could then settle permanently and build a house as well. After a year’s work placement ‘or mentoring’, they then followed up the founders of the GAEC. But things developed somewhat chaotically in a picaresque small town environment where the owners kept changing their minds and reneged time and time again.

In the dairy, Anne-Lise turns the curds and whey

But Anne-Lise and Boris are tough, they are not just a pair of dreamers wanting to return to the land, they weren’t born yesterday. They have thought their project through step by step. Anne Lise’s great-grandmother was a country woman not far from Aubagne, her father’s wife had, like her, gone down the road from town to village, whereas Boris started out with cattle. His grandparents were small farmers in the Limousin, and he learnt his trade in Normandy, looking after a 40-hectare farm with around a hundred cows and quite a few apple trees.

Before meeting his partner, he had not planned to be a farmer but a carpenter, and you only have to stroll around the farm buildings to see how he has not lost his talent for woodwork. Quite clearly, there is not enough money yet to pay an employee full time, and their days are very busy. They would like to increase their stock of five pigs for domestic use to 15 or 29 animals to diversify their income and buy a few things for the house, but they cannot borrow any more from the bank.

Anne-Lise and Boris produce Ossau-Iraty made with raw milk, and a cured Etxekoa and also a fragrant breuil made from whey

On the farm, they have redone everything, reorganised and conformed to regulations to process the 70,000 litres of milk and produce 10 tonnes of cheese every year. Their Ossau-Iraty is a real marvel and is only sold locally. By buying it you will be giving yourself a treat and you will also be helping a great and noble farming family (Basques).