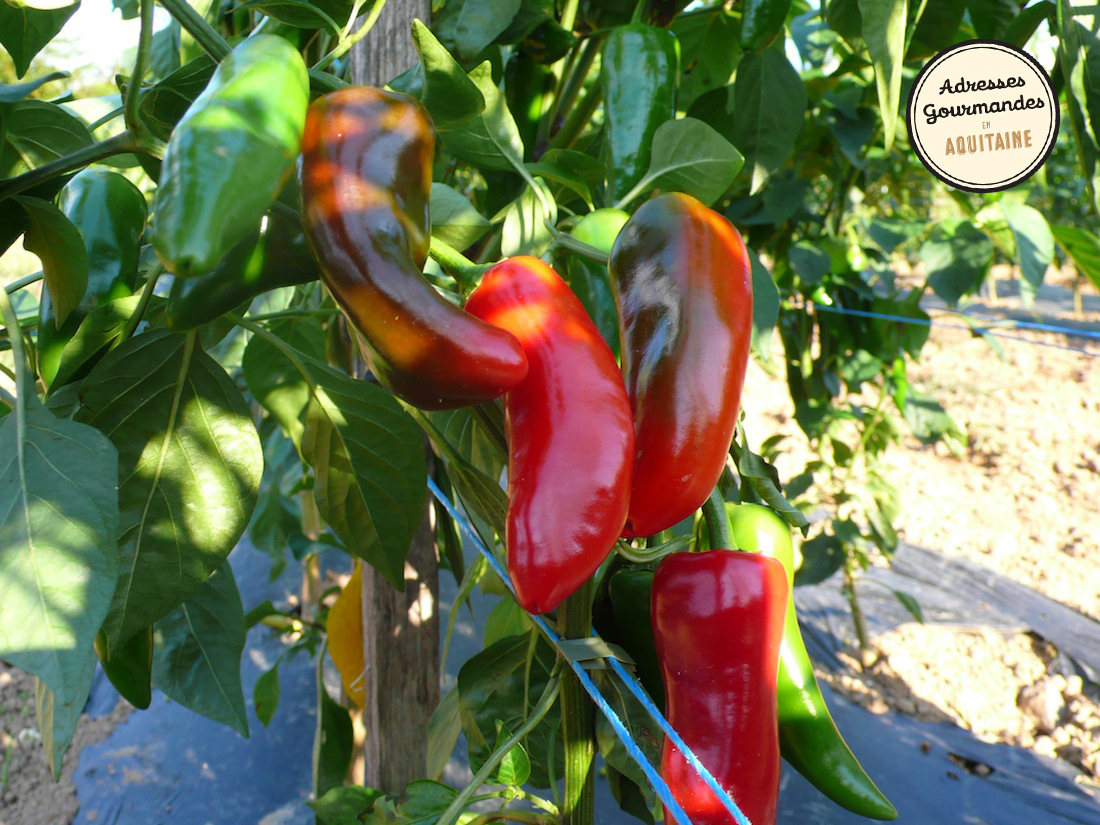 Vincent Hurpeau can be placed at the top of any list of proponents of a Zen attitude. Rain or shine he takes nature at its word. It should be said that when you have battled for four years to get Espelette pepper classified with A.O.C. denomination and then A.O.P., it makes you philosophical about the weather and the time that passes.

The village of la Bastide-Clairence has existed for 700 years and counting, and, with 1000 permanent inhabitants, it is a haven for tourists and we can see why. A picture postcard village. The day we visit the local farm shop it is Vincent Hurpeau who mans the place, standing straight as a die, he speaks in an even tone, impervious to the pressure of any demands made on him, and who makes every effort to show the band of ill-informed tourists in flowery shorts the finer points of Ossau-Iraty or the Itxassou cherry jam.

‘I like to be on the spot, it is a smart way of selling our products. On the one hand, we pooled our resources, and it is less expensive for each producer and as we are coopted to work you can always make sure that your products are being properly marketed.’

And we also think that it serves him better than the others as he could quite easily sell his two star products in a shop measuring one metre square. Ground Espelette pepper and the same pepper purée in a little 50-gramme pot, and that is Vincent’s financial set up in a nutshell. Well, not exactly.

‘My parents lived in Bordeaux, nothing to do with a farming background, but I studied horticulture in Lot-et-Garonne and then business studies. At one point in my life I wanted to go back to the land, to get my hands dirty and I moved to Espelette in 1999, quite by chance really. I bought my first greenhouse for growing vegetables and selling plants from there. At the time, I rented half a hectare and it worked well from the start.’ But wait, the half hectare in question which is adjacent to his house is practically in the centre of the village of Espelette and that must have some effect, as the village is 100% organised round the production of the pepper that bears its name.

So Vincent caved in and had a go at the emblematic local plant : Capsicum annum var Gorria, in the Basque language gorria means red. And as the guy does not do things by halves, from the start he favoured quality over quantity. ‘I never abandoned horticulture, and by diversifying my economic model I can also play with rotation of soils and with the additional income. Sales of Espelette pepper and constantly on the rise Production is restricted to ten districts with A.O.C. and A.O.P. and I could easily increase my income, but quality is more important to me.’

Three kilometres along the route to Itxassou and you come to the bit of land that Vincent has bought, three hectares where the neighbour’s horses roam, as it is clear that part of the land has been left wild. ‘The principle is rotation of land, so that the pepper grows well, the soil must be good as well and we know that monoculture over several years does not work. I alternate flowers and vegetables with the pepper. There, as you can see, we are about to begin harvesting (it is the end of August -editor’s comment) by hand of course.’ We come across a withered plant which does not look like it is ready to yield a single pepper.

‘It is a fungus, we do not know how, but sometimes you can lose a plant just like that, in 24 hours. We just try to isolate it, but I don’t want any plant protection products on my plantations.’ And the absence of any foreign product, preservative or additive is also the strict rule, right up to potting the product following a three week natural drying process. 10,000 plants, four tonnes of fresh pepper which is destined to be ground and powdered, all grown with only the help of sunshine and water.

Vincent Hurpeau’s pepper is in fact a bit more expensive than the others, but his production methods result in an astonishing subtlety of flavours which makes that of his competitors look like nothing more than a simple slightly spicy powder. And as Vincent is the ultimate perfectionist, he goes even further: ‘We have devised some quite rigorous specifications and we also do our labelling by hand in order to control the quality of the paper and the glue.’