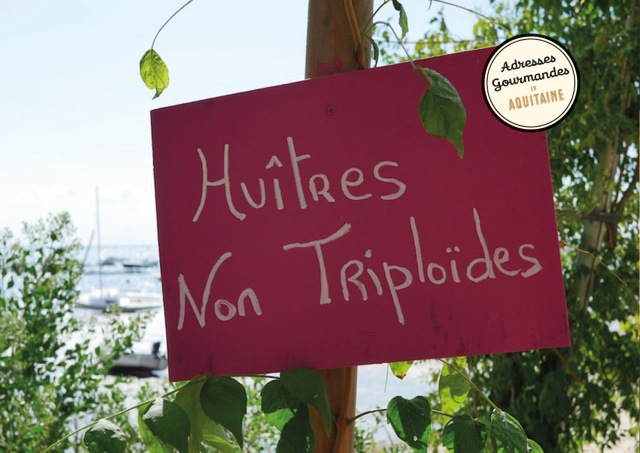 Four English men have just settled themselves under the arbour in front of Agnès et Hervé Pontet’s hut in the little Oyster producing village of Les Jacquets. It has been a long journey. They came from south Périgord, which took an hour and a half of roads, for just one thing: to visit the Pontents where they bought oysters at the evening market held every summer in Pizou in the Dordogne Looking out onto the lake, the four tourists are full of praise and enthusiasm, warmly welcomed by Hervé, a 47-year-old, with three-day stubble, shaved head and lovely blue eyes.

Since he opened up shop in front of his hut, visits like this are becoming increasingly frequent for the Pontets: ‘by word of mouth, we keep things as simple as possible.’ It is true that comfort is pretty basic here, no frills, quite different from the huts on the headland, all cramped together as if they were in some stylish homes magazine. ‘I’ve got nothing against people wearing a lovely white dress wanting to tread across the decking but that isn’t how we do things. We are a bit more casual with our feet in the sand.’ Feet in the sand, just enough shade needed for this sunny day, an amazing view of the basin, the Pontet ‘way’ has a lot to recommend it. Especially as here it is the oyster farmer himself who opens and serves your oysters. It is also the same person who tirelessly explains to the small tables why he has placed signs everywhere saying ‘natural oyster’.

It is a protest against genetically modified oysters
And Hervé needs little encouragement to launch into precise explanations of the virtues of traditional oyster production, and in particular, the diploid oyster which is born in the sea and reproduces naturally, as opposed to the triploid oyster which is produced in a hatchery and is genetically modified. Hervé has decided to tackle this issue, which the public is barely aware of, by explaining the ins and outs to his customers. ‘My aim is to inform, not to say which is better or not quite as good just so that people know what they are eating.’ And it is in the interests of defending this cause that he has joined the Association of Traditional Oyster Farmers.

Suddenly, he pops into his hut and is back in a flash withCultures marines, a shellfish producers’ trade magazine, which contains a 4-page article providing the low down on a recent initiative by a green senator to label products differently according to whether they are diploid or triploid. ‘It is not exactly as if we were on the verge of a crisis like there was with mad cow disease. At the time, the traditional craft butchers who knew where their meat came from and how the stock was fed, came out of it a lot better off!’ Hervé claims, before adding ‘and anyway I don’t want to depend on the hatcheries’, recalling in this respect that the famous genetically modified oysters are totally sterile and cannot reproduce, a ‘detail’ which recalls other procedures such as genetically modified seeds.

Respect the oyster’s natural rhythms
He goes on to add: ‘I try to respect nature and the seasons. My oysters vary, based on the place and the calendar, which is why I don’t sell to restaurateurs, they always want to have the same product, whatever the season, but that is impossible. When the oyster is reproducing it becomes naturally milky and when the eggs are released it is not as plump. That is its natural rhythm we can’t do anything about that’. Point taken, Agnès and Hervé like to respect nature and preferred to restrict their number of farms to two: the first at l’Île aux oiseaux, and the second at Grand banc : ‘with our 15 tonnes annually we are a craft industry!’ Hervé says with a laugh. And he adds ‘I sell natural oysters, so of course my farms aren’t exactly picture postcard perfect. Others sell a brand or an image of the lake, but I don’t do that.’

Just the basin. When asked about his favourite spot, the son, grandson and great-grandson of oyster farmers, someone ‘on the inside’ replies disarmingly: ‘that is the only lake that I know. I just go to the place where I keep my oysters.’ As to the ocean on our doorstop, it’s simple, he hasn’t dipped his toes in the water for years, because he can scarcely remember what holidays are all about: ‘we took three days off in February and eight days two years ago. I was fed up, we hadn’t had a holiday for eight years!’. But Hervé is not complaining, he loves his job, producing natural oysters, selling them and tirelessly explaining to customers what they need to know about the oysters that they are eating.