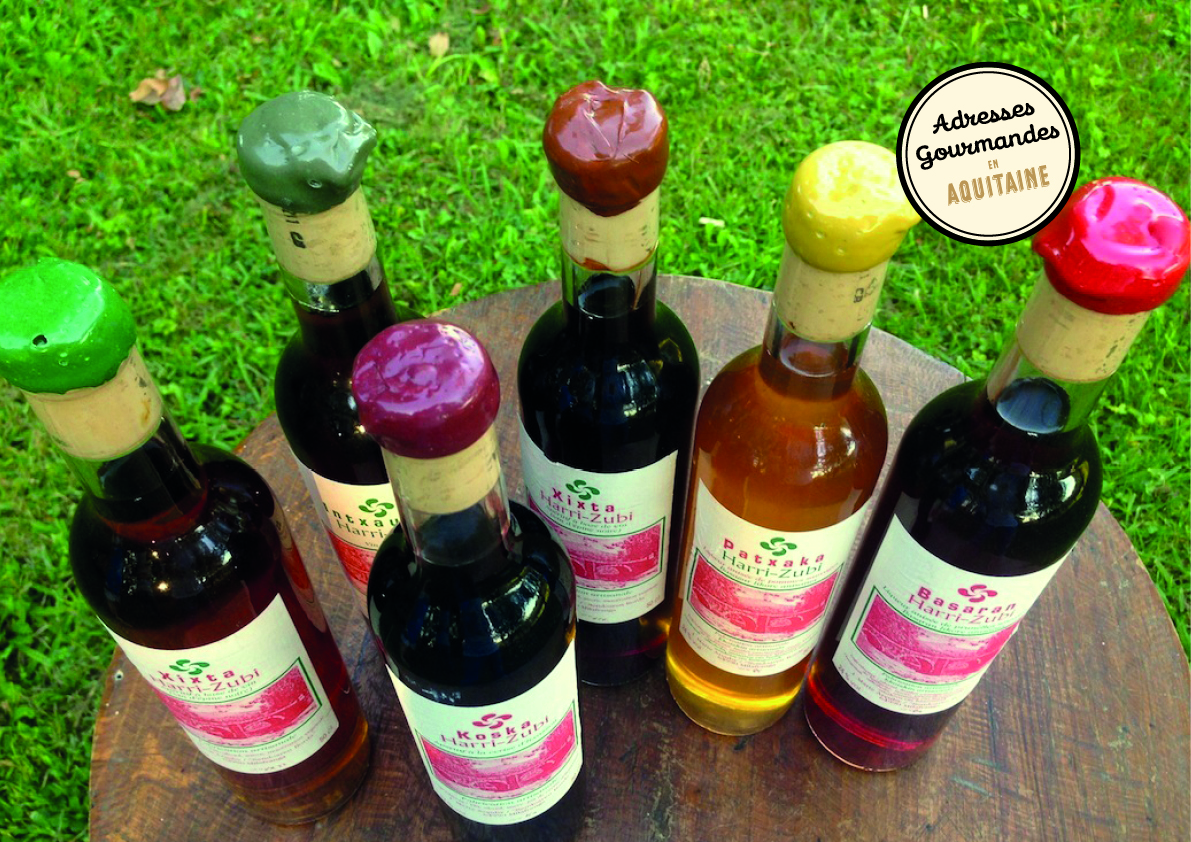 Right, things do not begin well for the story of the peasant farmer who, down the generations has revived an alcoholic drink made in the purest Basque tradition. For a start, Jean-Marie Arçuby is a ski monitor in the Alpes. And then things get a bit mixed up with the business of patxaran or pacharan when he welcomes you with some of his own figs and pain d’épice or spicy gingerbread. Luckily there is an aperitif to clear things up.

We head to a huge field next to his house to assess the raw material.

On arrival at the house in Sendoaren Borda de Villefranque, the first thing Jean-Marie does is show us his fig tree. And as it is late August there are figs to taste. If we had not come for another reason we would have stopped there; the fruit is exceptional.‘ They should be well washed before eating because just before the harvest I use quite a lot of pesticide to make sure they last a long time.’ He is so serious that there is a second’s hesitation while we consider making our getaway.

‘No, it is just a joke that I sometimes make when I sell them in the market, obviously they are not treated with anything, either before or after the harvest, like everything else here!’ Jokes aside, Jean-Marie effectively does his marketing and begins by railing against everything that is not Basque and yet is sold under that label. ‘It is unbelievable sometimes I do the policing myself when I see a stall with the Basque flag and Basque tablecloths, pure decoration to sell industrial products. most of which not made in the region.’

It is more a bush than a tree, the branches of which are very thorny, tangled and leafy.

Yes, ok when you are a ski monitor with Club Med in the Maurienne Valley in Savoie, it would not perhaps be too much to bring it back wouldn’t it? Jean-Marie freely admits that the financial model for production and sale of quality pacharan does not allow him to make a living. Even if he has considerably diversified his products with walnut wine (Intxaurra) or a fantastic sloe wine (Xixta xuri) resulting from maceration of young blackthorn shoots in white wine, alcohol and sugar (excellent with a foie gras…), even if he also resells an exceptional spiced loaf; making ends meet and feeding a family on the strength of pacharan is not going to work. So, in winter when there is not much to do on his farm, he might as well earn a bit where he can.

A few apples as well in the fields that he manages to turn into one of his magic potions.

We head to a huge field beside his house to view the raw material. Because to make pacharan you must have blackthorn or sloe trees which should not be confused with plum trees for those who tended to skip their earth science classes at school. No, it is more a bush than a tree, with very thorny, tangled and leafy branches. The bushes can be three to five metres high and the sloe which is the size of a bead hovers between dark blue and black in colour. Jean-Marie has 150 of these bushes in his field beside a stream, because the sloe likes humidity. It is late August and the harvest has begun, generally with the help of friends as seasonal workers, so luckily it is good fun to be had with a job that is not easy, in an environment where there are more thorns than fruits.

And then we are off to the laboratory where the sloe will need to cosy up for a ten-month infusion with home-made anise liqueur, that is, 100 kilos of sloe to 500 litres of alcohol. That is where the secret lies. As you can imagine, Jean-Marie does not give us the full recipe. It is based on pure agricultural alcohol in which green aniseed and star anise are macerated and then he adds his own touch which makes his pacharan so special. And why is this? Well, because this alcohol is 24% and its special taste is imparted by the sloe which needs some acidity. If you are too heavy-handed with the anise or the sugar, you will end up with a Ricard pastis soup, and that is difficult to reconcile with Basque culture.

At this point you begin to wonder if this drink was invented by Jean-Louis and his chums. Well not exactly. Let’s be honest anyway, our historical research ended where the legend began. What’s more, Jean-Marie does not protest too much. ‘According to legend patxaran was developed in the Middle Ages from a recipe made by the monks of the Leire Abbey who were summoned to the court of the king of Navarre. Apparently they fed him a red medicinal liquid, largely based on sloes. In short, the sovereign got better.’

Historically, there may well be some truth in the tale. Following the capture of Pamplona by the Duke of Alba’s troups in 1512, records show that the kings of Navarre used a remedy for digestive problems known as Patxaran. Jean-Marie does not make a big thing of it, he knows that he sells everything he produces because his pacharan is really good and not because it is legendary.