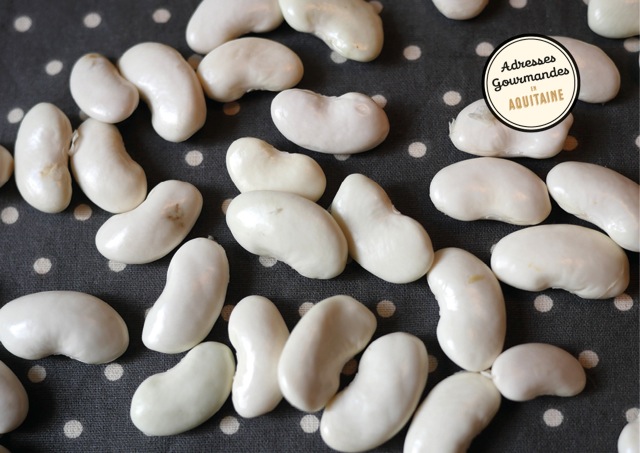 The Tarbais cousin
By Sonia Moumen

A lovely valley, a bit of forest, further off a field of maize beans and even further away a massive kiwi plantation like an ocean of greenery surging in undulating waves. We are in Béarn a few kilometres from Orthez. Joël Peube, a big lad both in size and age, his eyes creased and his face weather beaten, treats us to a warm welcome as if we were old friends returning from some distant country.

And talking of far off countries, he knows more than most, thanks to a globe-trotting life, travelling all over the world before settling in this little corner of the Béarn.

‘My life is like a novel. Agriculture was my childhood dream. Previously I worked in the luxury hotel business before.’

That experience provided him with a passport that took him round the world, to islands and sunshine ‘I was a mercenary and as I was single they always sent me abroad’ Joël recalls ‘for my first job I was just 21 and I was sent to Tahiti. Over there you don’t really need to work to live. There were just lots of pretty girls. I chose to embrace the Tahitian lifestyle’.

He seems paused in thought for a moment, then the Bearnais farmer returns to the issue at hand ‘Tahiti, it’s the land of milk and honey, you plant anything and it comes up!’. He lived there for eight years, not making fruit and vegetables grow, but working for a chain of top hotels. This was followed by periods in Sierra Leone, Guinea, Morocco, Bora Bora and Moorea. When you listen to him listing these destinations with their smooth sand and crystalline waters you wonder what brought him to the Béarnaise hills, if it wasn’t only to fulfil that childhood dream. Having made his decision, he returned to France and in 1987 Joel launched his business with one of his brothers. ‘In order to become a farmer I had to undergo some training. Which was a good thing because when you spend time in the islands your brain tends to atrophy I only used about 200 words of French! Expat conversation tends to be restricted: money, women, beaches… The training helped to get my neurons working again!’

The call of the land

The two brothers decided to grow kiwis ‘it was a new product, easy and at that time there were no diseases or any competition.’ But agriculture is a huge tie for a man like Joël and fulfilling his old dream has a cost: there would be no more opportunities for the globe trotter to set off to far flung destinations. So as he was missing the tourism side of things, with the aid of his brother he managed to reconcile agriculture with his interest in hotels and catering For 13 years, he spent part of the year as a maître d’hôtel at La Croix Valmer in the bay of Cavalaire-sur-Mer, halfway between Le Lavandou and Saint-Tropez.

‘My aim was always to have my own working farm. I had no idea that I would get a taste for this travelling life voyages’ he says as if apologising perceiving the incongruousness of trying to make two careers, seemingly incompatible, exist side by side. When summarising this period of his life Joël does not need to waste words. It suffices for a big smile to spread across his features and his eyes light up: ‘it was great!’ The untimely death of his brother meant that this professional madness had to end, even though he admits that he hesitated – ’right up to when I was about to board the plane’ – for a nice job in an Australian palace. His mother Solange, never far away, as she and Joël live under the same roof, shrugs her shoulders as if the Australian dream was just a bit of fun ‘the only thing you ever had in your head was land, land and more land. My husband and I were dying for him to become a farmer. My husband was a farmer’s son, he knew what it was all about.’

The green way of life: between kiwis and beans but

From 2005, Joël Peube gave up his double life to concentrate on the farm that he developed according to tastes, to the demand, frosts, drought and his own wishes. Today he has a few Bazadaise cows ‘for my own pleasure’ and to maintain his ‘a bit too sloping slopes, I’m too old to be playing stuntman with my tractor’ and he concentrated on his kiwis and his haricot beans. This bean came from South America and is grown up the stalks of the maize plant, and Joël Peube began to cultivate it in 2010. And quite simply, he loves it. He has one minor gripe ‘The haricot bean is all very well in photos climbing up the maize but in terms of returns…’

Because despite Joël Peube being open and expressive and a native wit, he is not above a little bit of grumbling, although he almost immediately apologises with a familiar air: ‘a country farmer who doesn’t complain would be a proper farmer.’ At the age he is now, does Joël Peube accept that he is now a farmer 100%? Has he finally given up tourism and the luxury restaurant business? Not entirely, because if he hasn’t gone organic – ‘if I were younger I would have done it’ – , he nevertheless promotes sustainable agriculture ‘after my years in the restaurant business, I would never sell my customers a product that I wouldn’t eat myself’. These days Joël finds his luxury in the fields and shares it with us on our plates.