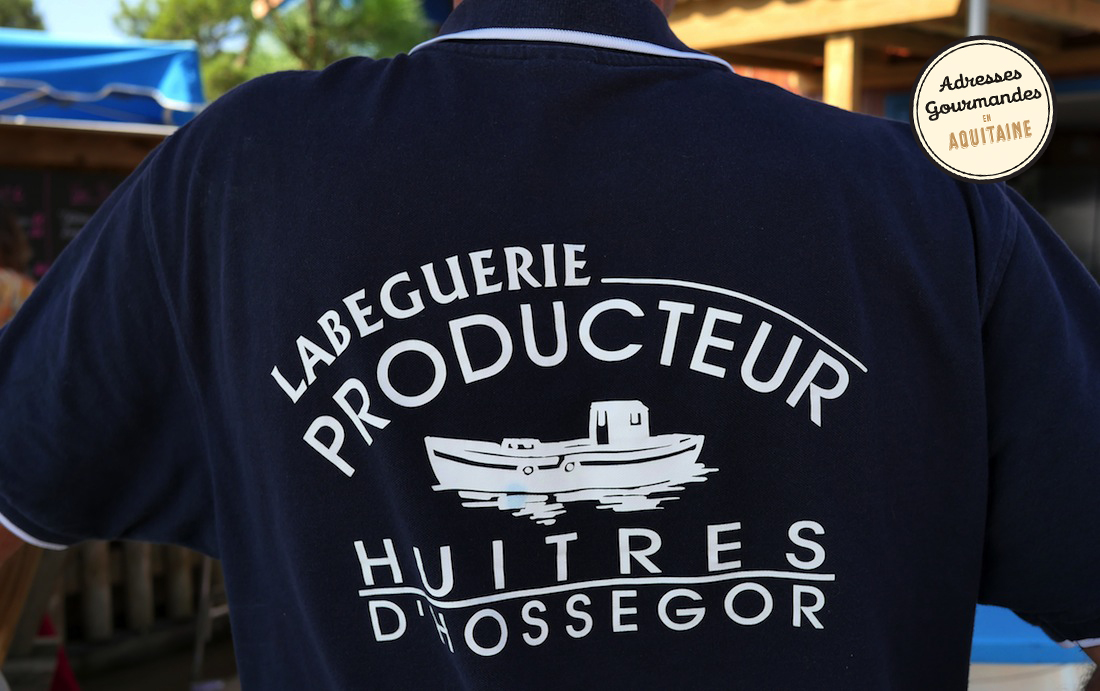 First you see a row of huts. Nestled together in serried ranks like oysters in a keepnet, there, at the end of Hossegor lake, a stone’s throw from where the Atlantic Ocean waves lap the shore. It is here at the end of the salt-water lake, that connects to the golf of Gascony and its tides, that the Hossegor oyster can be savoured. A microscopic production compared to the Arcachon basin or Oleron. There are in fact only six oyster farmers left in a traditional industry that dates back to 1870. One of these is Jérôme Labéguerie.

A native of Bayonne, a flamboyant character in his early forties and owner of La Cybèle, who did not start out thinking he would become an oyster farmer when, as a teenager he trained in sea fish farming in Arcachon, and then obtained a professional diploma in La Rochelle. ‘I loved fishing and fish. When I was training, we used to call the oysters rocks. They were completely inert products for us.’ Like all the youthful trainees, Jérôme had to follow a compulsory work placement on an oyster farm ‘nobody wanted to go and that’s why they had made it compulsory.’ And there, while not exactly a revelation, something clicked ‘I said to myself that maybe I could do something with this.’ There he was, the scion of a dynasty of funeral directors (his brother took on the family business, the fifth generation to do so) launching his own project to become an oyster farmer.

His father repurchased a funeral parlour in Hossegor, which gave Jérôme the opportunity to discover the oyster farm site at the end of the lake. ‘I was 22 years old when I applied to the Maritime Affairs Ministry to install an oyster farm, I ran that alongside my military service, the proper start was in 1997’. He was 23 years old and knew that he was undertaking an adventure with little knowledge of how it would turn out. ‘At the time, most of the other growers were old and business wasn’t great. Most had another backup business in order to survive. I was the youngest. The oldest producer took me under his wing. He believed in me. I brought new ideas, he followed them and everyone followed him. Together we managed to bounce back’ recalls the current Vice president for Hossegor oysters on the powerful Regional Committee of Archachon Aquitaine Shellfish farming.

An exceptional site
At the time the Hossegor oyster, did not really have a great image, and that is a euphemism, and oyster consumption in the huts was inconceivable at that time. ‘They really needed to believe in it. It was the last oyster production site before the Basque Country. We had the whole potential market of the coast at our feet. And besides, it is a fantastic location’.

Look! It’s an amazing location! At the time, they put us at the end of the lake thinking we wouldn’t be around for long. But we are still there! And anyway it is the most beautiful part of the lake, with the best views’ Jérôme laughs happily. Despite the beauty of the site, he is well aware of the drawbacks, such as regular silting episodes and pollution. Between 2012 and 2015, pollution forced oyster farms to halt sales of their shellfish four times, and for extended periods. This is largely why, in order to avoid bankruptcy caused by recurrent prohibitions on sale Jérôme has diversified production and methods for maturing them.

Migrating oysters
To keep it simple, he raises 2/3 of the so-called natural oysters (diploids) and 1/3 are ‘four seasons’ (triploid oysters that have been genetically modified). ‘I grow both, but I am completely transparent about explaining this to my customers. For the summer, there is a real difference between milky and non-milky oysters’. That is because of the origin of the baby oysters, most of which will then grow at Hossegor, another in the Ria d’Etel (Morbihan) and a further one at Banc d’Arguin in the Arcachon basin. ‘I have migrating oysters’ claims the producer ‘thanks to Bretagne, I have gone from 12 tonnes of oysters to 50 tonnes. That is where the iodine taste comes from!’

As to the taste of the Hossegor oyster, regardless of whether it is diploid or triploid, it can be found in the sugary sweetness of the nugget of flesh, revived by the wilder taste of the sea. A taste that Jérôme appreciates, he who freely admits to being a happy oyster farmer. By dint of enormous effort and a healthy dose of inventiveness, he has managed to transform the rocks of his adolescence into traditionally reared oysters that are eagerly sought after by shell fish lovers.