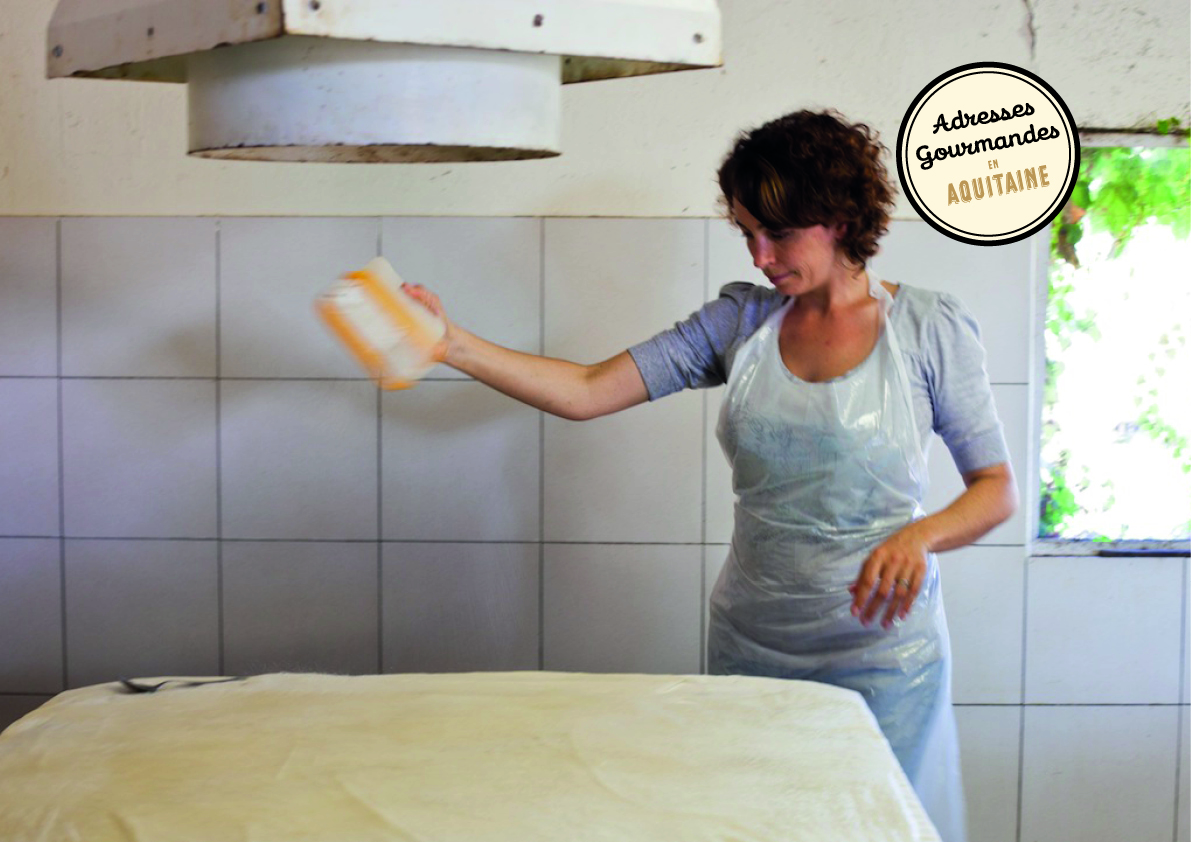 In the land of Agen plums, Elodie Chauvel makes Tourtière, the traditional speciality of Lot-et-Garonne with apples. But the farm is hardly short of plums. Along with strawberries and melons, it is in fact the farm’s main activity. Almost all the harvest goes to a cooperative, but in the on-site shop you can also find tomatoes, aubergines, courgettes and cucumbers and apricots. We buy some when we come to watch how Elodie works her pastry for her traditional Tourtière, making them light and sugary, just like her mother and her grandmother taught her.

‘There is only two years difference in age between me and my brother, we grew up here together, there was no such thing as summer camps for us as kids. Our holidays involved building cabins and rafts on the River Lot, we are just 50 metres from the river bank.’ Elodie recalls her childhood as she works the pastry for the Tourtière, a traditional Lot-et -Garonne pastry made with apples and Armagnac. It was her mother who taught her the way to do it.

Elodie’s father bought the farm 45 years ago. He was just twenty years old and the grandparents lived on the other side of the village on another smallholding. ‘He needed more space for his plans, Elodie continues, and at the time although there was sufficient land, in terms of farm buildings there was just this barn where the Tourtière is now made in the corner, and a small house made from beaten earth where my parents lived.’

The current farm is extensive, decorated with natural and rustic features, and the shop is spacious, with its light and airy ‘Tourtière corner’ where Elodie works, with sunshine streaming through the wide windows. ‘You talk about your pastry as if it was a real person’ exclaims a surprised boy who has come to buy the cake with his parents, ‘Well yes, it is my friend, I spend most of my time with it. Madame can be quite difficult, it only needs a rainy day for her to alter and the pastry becomes hard to work. Sometimes she says, I can’t get any finer, so stop now. When it isn’t thin enough it gets like cardboard and it is not so good.’

Agen prunes and other fruits.

Fruits and vegetables are still the farm’s main activity. Agen prunes of course, seeing as the farm is within the area of denomination of origin, but also gariguette, clery and mara des bois strawberries, as well as melon. All these fruits (grown on 40 ha in all, 35 of which are planted with Agen plum trees) are sold through a cooperative. ‘We also have greenhouses where we grow market garden produce, continues Elodie, like tomatoes, aubergines, cucumbers, courgettes, salad leaves, and fruit as well: peaches, nectarines, red fruits, apricots, small plums… We try to keep our range as broad as possible while keeping production small. The vegetables are harvested daily and we only sell them in the shop.’

The plums and major crops are sustainably produced. ‘This suits us, a cross between organic and conventional methods enables us to choose our treatment products.. Under glass production includes bio control ‘We have insects that eat other insects, for example ladybirds love to eat the aphids. ’The farm employs José and Fernanda who come from Portugal and stay with them from March to the end of September. Pierre, the father, as Elodie points out, is retired on paper only, ‘we are constantly enlisting his help’ but the responsibilities are mainly shared between brother and sister: ‘François is busy with production, and I am busy with sales and …. the Tourtière!’

La Tourtière
This gateau, also known in the south west as ‘the Gascon pastis’ dates back to the Middle Ages and the Moorish invasions. It is similar to the Moroccan pastilla made with a similar thin pastry, the Tourtière is a sweet dish. ‘< em>It has almost no fat and very little sugar, and so it is extremely light, explains Elodie who recalls that her grandmother used a goose feather to grease the pastry.’ Elodie is clearly better equipped, but the traditional moulds for the Tourtière, which are high with a rounded base, have almost disappeared from the region, ‘hardly anyone makes the Tourtière any more, these had to be specially ordered in three sizes’. In a plum-growing region, only apples are used for the recipe but with the addition of Armagnac or plum brandy. After 40 minutes in the oven, the alcohol evaporates and leaves just a pleasant taste.

The Tourtière has its own special festival at Penne-D’Agennais, an event which celebrated its 45th edition this year. Elodie’s mother has won several awards over the years, for the taste of her gateau. ‘But you should have seen the one that won the prize for the most beautiful entry, it looked just like a rose!’. What is Elodie planning now as she dedicates herself to this task all summer? Is she out to win more awards? ‘The main thing, is for people to come to see how I work! There are plenty of farms producing fruit and vegetables, but those who still make Tourtières are few and far between, a dozen at most! This brings us a different type of clientèle who also buy a few melons and tomatoes from our shop when they are here. And it keeps the tradition alive in the region.’