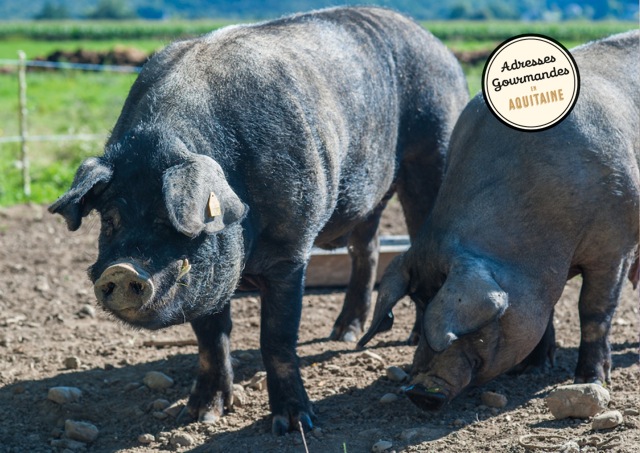 Olivier Maurin keeps his Basque-Béarnaise milking ewes and Gascon pigs on the outskirts of the Aspe valley. He sells his sheep’s milk cheese under the Ossau-Iraty label, along with a range of cured charcuterie and lamb, mutton and Gascon pork-based preserved products. His speciality is the Béarnais blood sausage.

You have to visit to buy his products. His farm is on the outskirts of the village of Asasp Arros on the Somport road. Discreetly signposted, at the end of a shaded track, a prefabricated building set in the courtyard serves as a shop and a reception area. All around, three hectares of forest are home to sixty Gascon pigs who roam more or less freely. Handsome pigs with a coarse black coat rather like the black Bigorre pigs ‘except that here we don’t have the designation of origin’ the breeder informs us. The Gascon pig is slow growing, raised to the age of sixteen to eighteen months. The meat is marbled, tender and the longer the pig lives the tastier the meat.

‘The old timers used to say that a pig should have seen two Augusts at least.’

His blood sausage recipe.
In his shop you will find dozens of sausages, coppas and, blood sausages all hanging above the shop counter. His recipe for Béarnais blood sausage differs from the rest because he does not mince his meat but chops it roughly by hand. The meat is boiled for three to four hours, then hand chopped. Olivier minces leeks and onions that he adds to the mix, stirs it all together and adds just the right amount of pig’s blood. ‘Just enough so that it is neither too pale nor too dark,’ then he adds salt and pepper and stuffs it in the casing before cooking for a good hour or so. His sausage is quite different and extremely tasty. ‘For every three pigs, I make sausage with three of the hams, mixed with shoulder meat, salt and pepper.’ The sausages are then cured at the Maison du Jambon in Arzac.

Farming vocation
Olivier Maurin does not come from a farming background and it is not a family-run business. ‘I had family in the Ossau Valley, and I spent all my holidays there. From the age of eleven I used to go up to the mountain pastures with a neighbouring shepherd. I stayed ten years. After my studies I worked for two years as a cheese maker. That enabled me to learn the craft. I wanted to set up a business and so I approached the Agricultural Board. Two agricultural producers were retiring and were looking for someone to take over. I met with Albert Gouadain, an old bachelor who kept dairy cows. I was looking for something smaller initially but his operation had potential, so I took the plunge.’ In 2005,Olivier, starting from scratch, invested in a flock of Basque-Béarnaise ewes and bought all the equipment and everything he needed. From fork handles to a tractor.

To make use of the whey left over from his cheese making, rather than let it go to waste, he purchased a few pigs. In 2010, almost by chance, a client sold him a Gascon sow. ‘I met two brothers who kept Gascon pigs, and they were passionate about promoting the breed and ensuring its survival. They helped me develop my enterprise. Today I have around sixty heads.’

Gascon pigs everywhere
Olivier works with Marie France his employee and who recently he began mentoring with a view to becoming permanent staff. She looks after the ewes and makes the cheese while he cooks and turns the sheeps’ meat into preserves. ‘I needed to find some premises for making the preserves, which I rent with a shepherdess colleague of mine. For processing the pork, I give my recipes to the Maison du Jambon in Arzac who make them up for me according to my specifications.’

Olivier sells all his produce on the farm and finds it hard to meet demand. He is hoping to set up a branch of Gascon pigs in the valley and to raise piglets that he would entrust to young producers wanting to get a start in farming, and who would fatten them for him. ‘We would set up a laboratory for the processing, and a collection system for the whey to feed them, and a saltery; the idea would be to raise four hundred pigs instead of sixty. There is certainly a demand there. ’

An article published as part of the Gourmet Addresses Application.