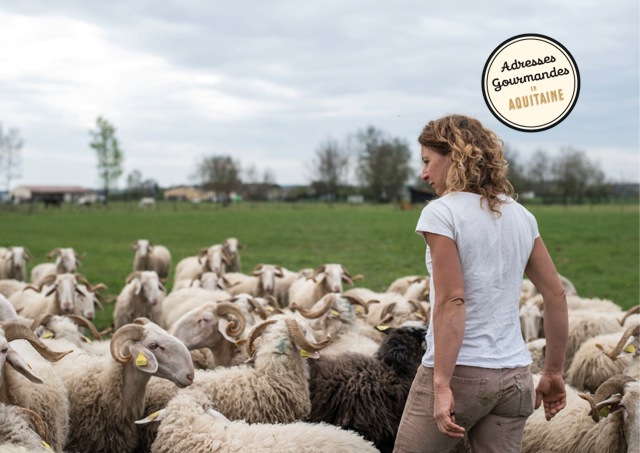 Among the vines of Marmandais, Sylvie Von de Vondele raises her Basque-Bearnaise ewes. A Pyrenean mountain race that has adapted perfectly to the Lot-et-Garonne meadows. At her farm ‘the little shepherdess’ produces superb cheeses with raw milk made in the traditional manner, using the know-how handed down to her by the old shepherds.

4 a.m. in the morning. Alone among her flock, balanced on a wooden milking stool, with a rope in her left hand and a zinc milk pail in the other, Sylvie sings her first song of the day, the famous ‘Hegoak’. To the sound of her amazing voice, one by one, the ewes make their way in for their first hand milking of the day. The cockerel perched on a haystack seems unperturbed by the competition.

‘I have always liked singing. At school, in the car, in my bathroom. At one time I even took part in a pastorale in the Béarnais. And here in the cheese room, the acoustics are brilliant, I love it.’

Rather than taking up a singing career, Sylvie initially followed the voice of reason, heavily influenced by her parents and her excellent school reports, ‘At secondary school, I wanted to join the Waters and Forestry Service, but my parents pushed me to continue studying as I was such a good pupil. So I ended up studying for a degree in history and ethnology. I passed the public examinations and became a teacher’. After 4 years in teaching, her passion got the better of her ‘I love the outdoor life. I grew up in the Gironde and there was a forest in front of our house. When I was little, I roamed the woods with my brothers looking for newts, shrews… I couldn’t see myself living without any contact with nature’. In 2004, she abandoned the world of schools and the educational system to undertake a fast track agricultural course. And during a work placement on a sheep dairy farm in Aretz, in the Basque Country, Sylvie caught the sheep farming bug.

Steep paths
Just like her flock Sylvie is a true mountaineer, used to the precipitous slopes of the Pyrenees. Following a period in the Béarn in the Ossau Valley, her fortunes took her to the Lot-et-Garonne, where she settled 6 years ago. Trained by the old traditional shepherds who taught and helped her to discover shepherding, she became a dedicated shepherdess.

‘Man’s relation with nature and animals is the cornerstone of sheep husbandry. We need to support breeds that are adapted to and will thrive in the right environment that suits the flock.’ she explains.

Up in the mountain, Sylvie began to learn about transhumance and swidden farming or slash and burn agriculture. When she returned from the mountain pastures, she also learned how to prepare for lambing, hand milking and then of course, how to make the traditionally made farmhouse cheeses. ‘Basically I chose this way of life for the mountains. It’s where I learned traditional techniques, and I am so proud of my skills.’ As the Lot-et-Garonne is not exactly known for its uplands and peaks, Sylvie acknowledges that she can be a little frustrated now and then. She always dreams of ‘going back to the mountain’ just like her ewes. ‘Wherever they find anything slightly resembling a promontory they climb on top. They can’t stop themselves. Next summer I plan to send them to a summer camp in the Béarn’ she says with a peal of laughter.

Raw milk stirred by hand.
Usually Sylvie’s days follow the same strictly ordered regime, even though some days, 2 cows and 120 ewes on 16 hectares of pasture can bring their minor trials and tribulations. Sometime carpenter, mason and full-time mum all at once, Sylvie is a force of nature and she lacks a ‘pause’ button. Having once fancied the idea of being a cabinet maker as well, she has found an outlet for her creative streak in ‘making her cheeses’.

‘Making bread, working with wood, I’ve always liked doing that kind of thing. When I am making a cheese, I particularly like the connection that I have with the material.’

Ancestral practices.
Once the ewes have been milked the resulting milk is immediately heated for 45 minutes, stirring non-stop to encourage curdling. It is quite a sight to see her plunge her arm into a basin of milk heated to 38º C stirring until the curd is perfect. Then comes the draining, moulding, pressing, unmoulding and a whole series of turns, over and over, all timed to precision. ‘When I get back from taking my daughter to school, I turn them one last time then I see to the ewes.’ In the afternoon, the rounds of cheese are rubbed with brine to salt the curd. The brine also affects the texture and the rind, with the main difficulty being getting the right degree of humidity in the saltery (the thermally and hygrometrically regulated cellar where the cheese matures ) so that the cheese curd retains a certain suppleness.

‘ It is interesting because you are on the go the whole time. I am always looking for a way to improve the products, to make the cheeses as traditional as possible Trying to ensure that the ones that come out best are not just exceptions. It is a permanent challenge’. Sylvie’s cheeses are then matured for a minimum of 120 days at a temperature of 13 degrees to allow the bacteria to do their work. Her days often end as they began; with the evening milking, around 4 p.m. and caring for any of her lambs that she is rearing by bottle.

‘With my ewes it is a bit like a family, I know them all, and I worry about each one. If they do something silly, I’m like their mum and I tell them off. But I always finish by singing them a song which helps the quality of the milk! ’