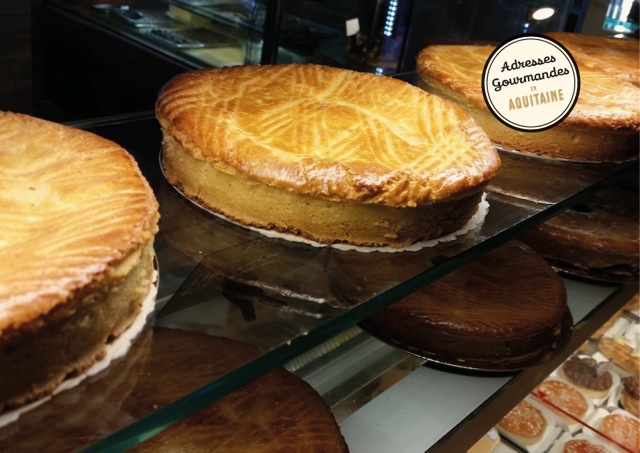 ‘We make local gourmet pastries’, that’s the motto of Le Bellis, a pastry shop a little off the beaten track, not far from the bustling seaside resort in Mimizan-Plage. An eldorado for pastries, cookies, cakes and two specialities that have made the shop famous: the chocolate fondant and the ‘pastis landais’.

At the controls, Gaëtan Cossoul, a charming, well-balanced young man, always smiling, stumbled into pastry making after a first, not exactly conclusive experience in the restaurant business. ‘I trained with a baker-pastry maker in the Landes, I stayed there for 5 years, but the adventure went wrong: the baker switched over to mass producing!.’ And if there is one thing Gaëtan loathes, it’s mass-produced bakery and pastry, the kind run by shameless investors. ‘In our pastries, you’ll never find gelatine, artificial colouring or foam,’ Pascal di Martino added. He’s a former financial and communication consultant, and now the other Le Bellis cornerstone.

Gaëtan and Pascal do everything together: elaborate new creations, make strategic choices, pitch in, and if necessary, finish each other’s sentences, even though Pascal insists: ‘Gaëtan is the one we want to put in the spotlight’. That’s how they found their shop name in 2011: ‘we wanted it to rhyme with Délice and bring to mind beauty!’ Pascal added enthusiastically. In fact, if the two men have one thing in common, it is undoubtedly their enthusiasm: they’re enthusiastic when they talk about their adventure together, when they get people to taste their remarkable pastries, when they defend their positioning as regional, gourmet and generous pastries made from quality products wisely selected in advance.

Their determination to provide quality paid off very quickly and the awards came almost immediately: Coq d’or for their chocolate fondant, Talents gourmands 2014, Label Maison de Qualité Prosper Montagné and since July 2015 Artisan-producer of Quality from the Collège Culinaire de France. The two young men would be wrong not to be proud of their achievements. The extremely simple, no-frill chocolate fondant has a truffled texture and a powerful taste that apparently made Philippe Etchebest say that he hadn’t eaten anything like it in 20 years! Following their success, they did test runs with white-chocolate fondants and milk-chocolate fondants. Disappointing. ‘It didn’t work!,’ they exclaimed in unison.

However, one thing that works is definitely their ‘pastis landais’ which isn’t – as they like to specify – neither Gascon, nor Béarnais. So, pastis landais (pastis means ‘dough’ in Occitan), also called, pastis Bourrit. It’s a sort of big, very dense brioche bun, with extremely tight crumb, which used to be baked on fancy occasions back when butter was considered a luxury product. Thanks to Louise, an old timer, Gaëtan went back to the basics of traditional pastis and added his own personal touch, ‘We try to replicate the handiwork of our ancestors and respect the rising time.’ The result is of eloquent simplicity: a big golden bun sprinkled with white pearl sugar, a taste of terroir blended with vanilla. It’s good enough to make you nostalgic for the days of resin workers and hand carts.

The call of the city

‘Since our pastries are simple, they travel well, and tourists often take them back home to give friends in their region a chance to taste them.’

In the peak season, tourists account for a significant portion of Le Bellis customers. Winter can be harder to manage: ‘We didn’t choose the easy way out by setting up the business in Mimizan-Plage, we have a real in-season/off-season problem, which isn’t always simple in a town with a population of only 7000. It’s a trying job; people have often advised us to move elsewhere. Set up business elsewhere? Gaëtan and Pascal readily admit that they miss the city – the real city – a little… a lot. Although they aren’t ready to give up their first shop in the heart of the Landes coast, they’re taking the time to think about developing in a more urban area. When and where, they didn’t say. All we know is that they will carry out the plan of taking their ‘local gourmet pastry’ further, together. Even though, as Pascal pointed out again and again: ‘Gaëtan is the one we want to put in the spotlight.’