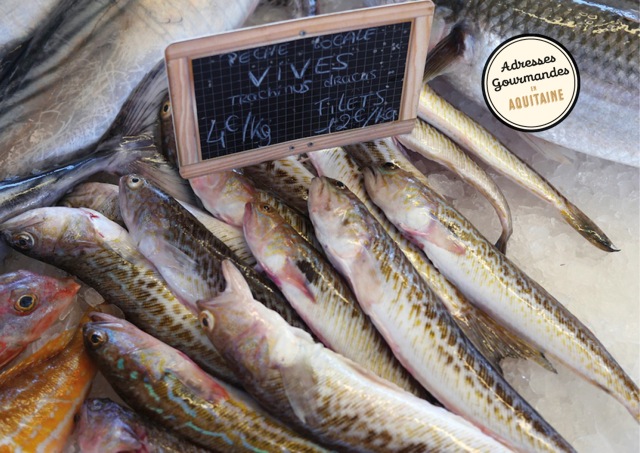 Off the boat’s rear end
By Sonia Moumen

Le Vent Divin, Le Mutant, Le Petit Prince, Le Toune, Ahaldena, Le Roi Carotte, l’Accalmie, Crésus (Croesus), Gavroche, Tétris… Some show off and inspire respect, some frighten and others entertain, some are reassuring while others are touching. The names of the boats are like those of our offspring; they are the image of what we are or what we’d like to be.

As far as that goes, the human imagination can get pretty carried away. And deep-sea fishermen are not any less endowed with it than anyone else, so long as the names they come up with tell a little about them. Just look and listen: the former owner of Croesus wears a gold chain and expensive watch. From that, one might conclude that he is as rich as the name of his ex-boat. The owner of RED explains with a laugh that it wasn’t really for its colour that he named his new boat that way but more in reference to a rather mediocre film by that name, RED for ‘Retirees are Extremely Dangerous’!

Sales ‘off the boat’s rear end’
If people notice the names of the Capbreton fishing boats so much, it’s not because they are more of them, or they’re bigger, or better-looking than elsewhere, no. It’s because their names are written in big letters on the wharf, just across from the Harbour Master’s office: a perfect line-up of 19 stands proudly displays the names of 19 fishing boats. For every boat, there’s a sales table. Because in Capbreton, there’s a tradition that’s unique in the region: selling ‘off the boat’s rear end’. A system of direct sales, without a go-between, very much in vogue since the return to favour of ‘short supply chains’ but that’s nothing new around here… Selling ‘at tables’ is in fact a privilege dating back to the 17th century and a decree by Colbert, a minister of Louis the Great, which allowed fishermen to sell straight to their customers without going through the fish market auction. A godsend for the little Capbreton fishing port.

‘If we didn’t have this direct sales system, some small boats would no longer be around. Sometimes fish sells 4 to 5 times cheaper at the market auction,’ explained Patrick Lafargue, a former fisherman and now chairman of the regional deep-sea fishing committee. During the high tourist season, when the little coastal town goes from slightly under 7,000 inhabitants to 60,000, the stalls are flooded by clients extremely fond of fresh fish. There are also calmer days when only a few of the 19 boats are there selling, depending on if they’ve gone out or come back from their fishing expeditions. Expeditions that may last from one to 10 days.

Here, the only fish that are sold are the ones caught along the coasts and in the Bay of Biscay, depending on the season and what the ocean has to offer: squid, red mullet, sole, hake, sea bass, monkfish, stingray, skate, dories, rays, cod, dab, crab or scorpion fish. Depending on the fishing techniques used, the 19 crews don’t always bring back the same thing. Most of them are gillnetters who fish with fixed or drift nets; the height and size of the mesh depend on the species sought, hake, sole, sea bass, red mullet or meagre. Some also use a dragnet, or purse seines, a type of net that allows schools of fish to be encircled, a technique especially suitable for anchovies, sardines or tuna.

For that matter, the port has a few trawlers such as ‘Roi Carotte’ or ‘Grand Celte’ and a few anglers or pole fishermen (for bluefin tuna). As any fish lover will tell you, those last two techniques guarantee the prettiest, freshest fish. Most often, it’s the daughters or wives of fishermen who sell, sometimes the sons, if they haven’t become a seaman at their father’s side. Although the competition between fishermen is stiff, the atmosphere is usually easy-going: they know that they will sell most of their catch at a good price and that in any case the surplus will be collected to be sold at the fish market auction in Saint-Jean-de-Luz/Ciboure.

If you get there at the right time, you can watch the fishermen return to port, unload their catch and maybe even chat with them. As of late, boats have started offering the possibility of going out to sea and watching a ‘day in the life of a fisherman’, very early in the morning, of course. Some boats call it ‘pescatourism’ or fishing tourism. An opportunity to learn the story behind the boats that line up, stubborn and imperturbable, with their names in large white letters on a navy blue background, just a stone’s throw from the harbour master’s office.