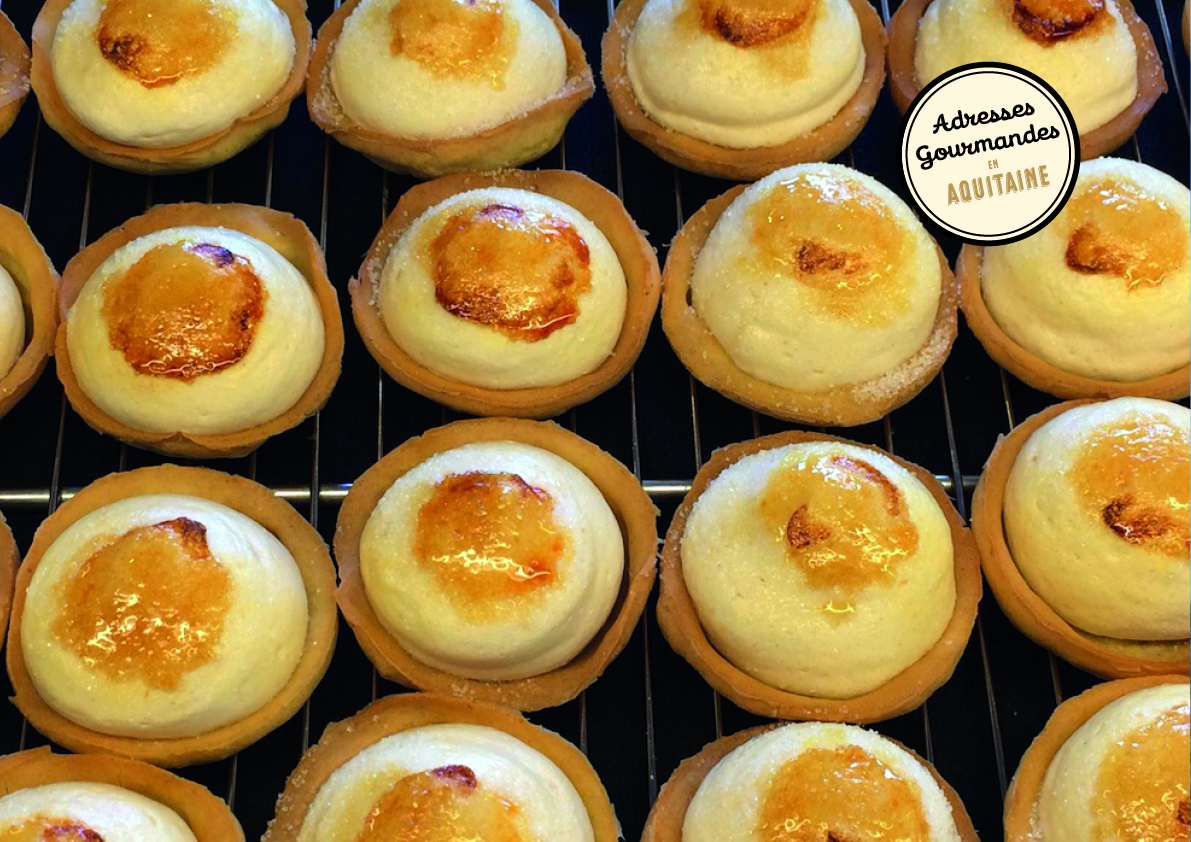 A Gascon affair
By Nathalie Vallez

‘Horizontally and in a cool place…’ Marie-Josée Seguin’s famous phrase still rings out in the little Captieux pastry shop that made the famous ‘puits d’amour’ successful. This is where, for over 70 years, the legend of the highly-addictive sweet gradually came into being. The renowned pastry, which actually is more like a polka than a ‘well of love’ (the literal translation), is a restyled version of a puff pastry shell filled with light chiboust cream, topped with a caramel glaze. Since 2013, the small family business has been owned by two Bordeaux entrepreneurs who, they swear, haven’t changed a thing!

Brice Leguillon is very familiar with Captieux and the surrounding area. For years, he went there at weekends to hunt, or get together with friends. On Sundays, a detour to the famous pastry shop, which sells ‘puits d’amour’, was a must. With the Sunday night blues, he never failed to muse: ‘What a pity we don’t have these in Bordeaux’. So naturally, he jumped at the chance when he heard at Christmastime in 2012, that the owners wanted to sell. However, embarking on the adventure alone seemed complicated to him. That’s when he met Stéphane Gonzalez, who was to become his partner. The two 30-somethings are both business school graduates, were each bored with their jobs, and didn’t know a thing about making pastries! So why them and not one of the famous pastry chefs who’d been drooling over the business deal for quite some time? The answer most likely lies in the human dimension of this proud Gascon family business. ‘We went to see them, full of humility’, Brice explained, ‘We didn’t park a big 4WD in front of the shop, we knew what we were doing.’ Because at the Seguin’s, you have to prove your credentials!

In the pastry shop, where the Seguin family and the employees spend their time, Marie-Josée reigned supreme behind the counter.

‘Above all, the one thing you should never tell her was that the ‘puits d’amour’ were for the next day, she would take them away from you immediately and snap back that they were to be eaten the same day… or not at all!’ Brice told us.

Behind him, his brother Jacques, ‘an excellent pastry chef’ is whipping up his little delicacies, baba au rum and puits d’amour, whose recipe changes depending on the weather. ‘They’re very fragile pastries,’ Stéphane explains, ‘if it rains they go soft so we have to adapt!’ The story began in 1940, Jacques and Marie-Josée’s parents, Médoc natives, were seasonal workers in Soulac for pastry chef from Pau, who was a puits d’amour expert. When that chef retired, without an heir, he gave his pastry moulds and entrusted his know-how to Mr Seguin who opened a pastry shop in Captieux in 1944. For several decades, the renowned ‘puits d’amour’ saw its fame grow, until one day in 1981, when old Seguin announced to his children while out pigeon hunting:

‘Tomorrow, we’re closing the pastry shop, if you want to take over the reins, you have until tonight to decide!’

The next day, his son, who had travelled around, and his daughter, ‘a Landes native through and through!’, were at the helm, carrying on the family tradition.

Over 30 years have gone by, but the ‘puits d’amour’ is as young as ever and people in Bordeaux have been known to drive a 100-km round trip to taste them. When the time came to hand over the reins, the Seguins were definitely not indifferent to how willing their young buyers were to follow in their footsteps. ‘We’ve always been very clear about the fact that the headquarters would stay in Captieux.’ And although the pastry shop now has a more efficient cold chain, it is still the way it was back in the day.

‘Even now,’ Stéphane explained, ‘it’s still made by hand from A to Z,’ giving preference to local suppliers like the milk from Bazas. ‘We started out very carefree,’ Brice admitted, ‘And we’ve had to prove ourselves. They told us: ‘Tomorrow at 4:30 a.m.’ and we rose to the challenge!’

So, for 2 months, Jacques trained the young men from Bordeaux. When Jacques considered they were ready, he and his sister both agreed to sell. Still, Jacques and Marie-Josée are never far away: ‘If needed, Jacques comes by and gives us a hand.’ Although a wind of modernity has blown over their business by opening a second shop in Bordeaux, they’ve also made every effort to carry on what was handed down to them, going so far as to christen their business ‘Maison Seguin’. Word of mouth is what has made the ‘puits d’amour’ so successful, a philosophy that is truly in keeping with the two managers. And although their pipe dream is to develop, they both want to take it slow:

‘It wasn’t a recipe we were given, it was know-how. We want to preserve the soul of the Seguin business.’