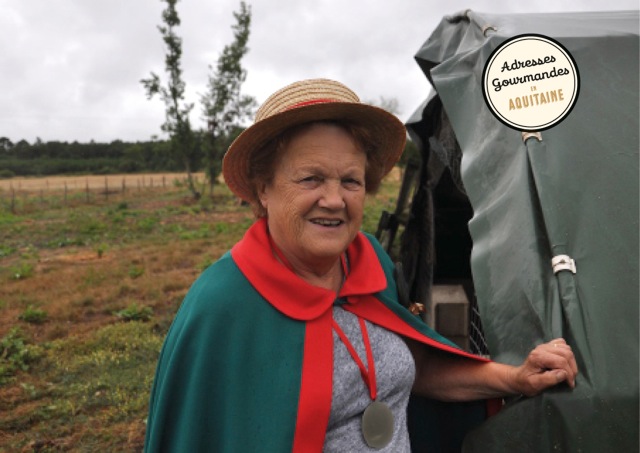 A Pioneer in raising capons
By Ariane Puccini

In Grignols, a small village nestled in the middle of the Landes of Gascony, half the year, capons are raised in the yards. In just about 30 years, a few producers have managed to build the reputation of the flavourful poultry. Raised in the open air in the summertime, sheltered and pampered in winter, grain-fed then put on a diet of bread and milk in the last few days of breeding, the Grignols capons are honoured every year during a fair held on the last Sunday before Christmas in Grignols. Getting acquainted with one of the pioneers.

However, Nadine Castagnet doesn’t have a mean ‘caponizing’ bone in her body, she swears to it. For that matter, the 70-something had never noticed until now that only women had tackled the delicate, irreversible operation on the gallus gallus domesticus in Grignols, in south Gironde. That makes her smile but she prefers ascribing it to how ‘patient’ the operators are when castrating roosters. ‘You mustn’t touch the femoral artery!’, she warned, with no sign of a joke. Nadine Castagnet, a resident of Marions, a stone’s throw from Grignols, is one of the few local producers of capons bearing the ‘Chapon de Grignols’ label, named after the area. Twenty-five years ago, she was even one of the first capon farmers in the little area. There are now a dozen farmers raising the gelded male chickens that are such a huge hit at family holiday meals. Its tender, marbled meat has achieved fame that drives some capon-lovers to travel kilometres, sometimes from the Aquitaine coast, all the way to this little portion of the Landes of Gascony to get their poultry. And yet, initially, it was mainly a matter of making the best of a bad situation.

Six months of patience
Back in 1988, the dairy quotas used to earmark surplus milk production for destruction. By feeding the capons bread and milk during their last month of breeding, the waste could be limited. There was also a Grignols restaurant owner who wanted to offer the local production on his menu. At the time, Nadine Castagnet was still running the village café where the boules players would gather at weekends. She was already familiar with poultry. Because, like lots of people in the area, she raised some, mainly ducks, in her yard, behind the café.

With the help of a veterinarian, Nadine Castagnet decided to give it a try, alongside a half dozen pioneers. Like her, the other volunteers, often retired farmers, only raised capons to supplement their income, no promise of ‘the moon and the stars’, added Nadine Castagnet modestly, now retired. They raise an average of 150 to 200 capons a year. And it isn’t easy, the retiree admitted. ‘In the summer, it’s not so hard when the capons are outside, but its more tiring in the winter when they are inside, in the old barn, and you have to bring them water, grain, and then bread and milk.’ In all, it takes six months of patience from early July, when the farmers get their castrated chickens, and late December, when they are sold.

Cape et chapeau � plume
Nadine Castagnet likes a job well done. Going to the slaughterhouse was never a picnic for her. ‘It goes fast, one after another. When you come out of the slaughterhouse, there are always feathers’, she grumbled, her hand mechanically sweeping the tablecloth. In December, comes the time to sell the capons. The village of Grignols and the group of farmers, that Nadine Castagnet still chaired up until two years ago, even started a fair to honour the castrated rooster. The last Sunday before Christmas, every year for the past 28, the village has been bustling, attracting almost twice its population in gourmets who come from all over the region. And for the occasion, Nadine Castagnet dresses up in the costume of the Chapon de Grignols guild, which she is in charge of. A cape, a feathered hat, a gold medal of a little castrated rooster – ceremonial garb to swear in the local figures… that’s what it takes to promote the capons.

Nadine has never counted all the trips she’s made through southwestern France to fly the flag for the Grignols capons. Now, most of the sales no longer take place at the fair, which proves that Nadine Castagnet didn’t wear herself out in vain. On the last Sunday before Christmas this year, she had already sold most of her poultry, like the other producers in the area. ‘By word of mouth!’, Nadine Castagnet explained tersely. Some foodies have already come to her house to pick up their capon. By January, every year, everything’s sold-out. Taciturn but self-assured, Nadine Castagnet admits ‘always trying everything’, tried raising and selling capons year round, unsuccessfully. So, capons will continue to be produced for the year-end holidays only. But now, despite the success, the capon farmer is a little worried about the future of the ‘Chapon de Grignols’ production. Personally, she has already cut in half the number of capons she raises. But she hasn’t lost hope. The guild has given itself a breath of fresh air. A new logo, promotion online… Nadine Castagnet is more than ready for the changing of the guard.