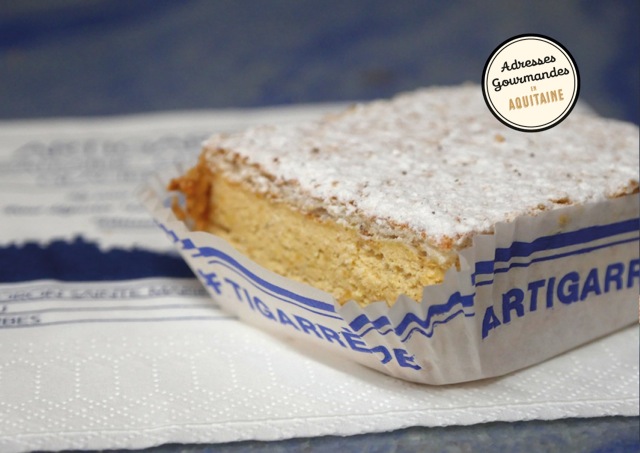 The most Bearnais Russian around
By Sonia Moumen

Walking into the Artigarrède pastry shop in Oloron-Sainte-Marie is like walking into a temple that you have heard about again and again and where you had always dreamed of setting foot. And now here you are, finally, in the ‘holy of holies’ of pastry shops in Béarn, here where, in utmost secrecy since 1925, they have been concocting the ‘Russe’ (Russian), a wonderfully light pastry that has built the reputation of this old Oloron business.

In the backroom, pastry chefs and pastry assistants hurry about in an almost-religious silence. At the helm of this little army dressed in immaculate white are Pierre and Michel, 30 and 35 years old respectively, the sons of the prestigious line of male and female pastry chefs, the current bearers of the trade secret. They don’t talk much, focused on work. With quick, precise moves, the first assembles the pastry that has made the family famous, while the second finishes a strawberry sorbet that could definitely become as famous as the ‘Russe’. Their mother, Nadine Bassignana, watches them fondly, happy that the tradition is being carried on by her two big and handsome straight-faced sons.

So this is where the real ‘Russe’ is made, the one that comes in little squares and big rectangles composed of four layers: two filled with almond paste meringue, one with praliné buttercream and the last topped with icing sugar to ‘allude to the snowy plains of Russia’. But what in the world is Russia doing in the Bearn landscape? And why does a pastry shop display the name of a pastry in big, dark-blue lettering on the front of its shop? Because after all, the ‘Russe’ is not unique to Béarn nor to the Artigarrède family business, it’s even a pastry that dates back to the 19th century and whose name apparently is due to the almonds, one of its main ingredients that were brought from faraway Crimea back in the day. Right, but as it were, the Artigarrède family gradually managed to impose their ‘Russe’ as the Russian standard, to such an extent that the family now claims to make the real, one and only ‘Russe’. An ‘exclusivity’ that didn’t come into being with a wave of a magic marketing wand but instead dates back to the 1920s when Adrien Artigarrède left the Ossau valley and his little village of Bescat to open a café in Oloron-Sainte-Marie. That was in 1923. At weekends, and sometimes to brighten up the daily routine, he sold pastries he’d made, including the ‘Russe’, to which it is said he had ‘added a little something extra’. Business was going well, Adrien and his wife Elise bought a nice building across from the cathedral, there where the sign is still hanging, and made pretty pastries using eggs and milk produced on their land where they raised chickens and cows. Their daughter Odette, married to Jean-Michel Bassignana, picked up the torch, then it was time for their son Jean-Paul married to Nadine, to continue the adventure, until their sons, Michel and Pierre, took the reins. The reins, meaning, the secret…

The whole time Nadine was telling the family saga, she kept an eye on the customers who entered the pastry shop in a constant flow and asked for ‘Russes’ non-stop. ‘It’s true that people, especially tourists, come for our ‘Russes’ even though we also make traditional pastries, rum babas, eclairs and millefeuilles. It’s hard to get rid of our image,’ she joked, both thrilled by the fame and tired by what is felt like a long battle. ‘Because to meet the demand without sacrificing the quality of the product, we’ve had to work hard. It’s a demanding profession. While other people were out having fun, we were working!’ Work, that’s what the 29 employees do tirelessly. Because the parent company in Oloron has to be supplied as well as the other three shops exclusively devoted to the ‘Russe’ pastries, in Pau, Tarbes and Saint-Jean-de-Luz. Nadine’s two sons, Pierre and Michel, are definitely right to stay focused on the way they make their ‘Russes’: thousands of fans are expecting them to carry on their secret know-how that makes the pastries so fluffy and creamy.