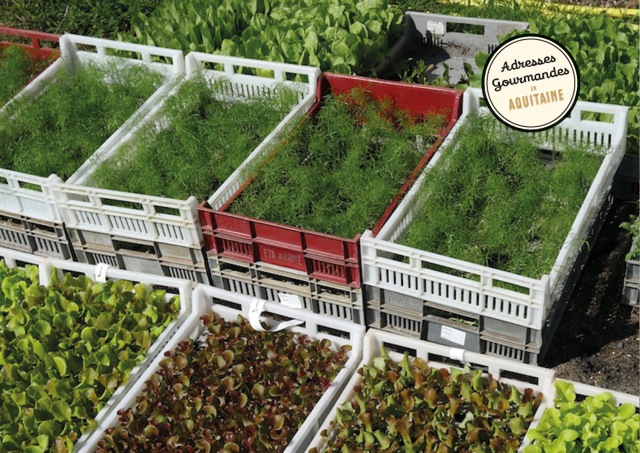 Arriving at the home of Pierre Gratadour, one of the most emblematic market gardeners in the Bordeaux area, requires a keen sense of direction and a good dose of patience: you have to go through a bunch of roundabouts, traffic lights and shopping areas before ever reaching his lair. A stone’s throw away from the suburban chaos is where Pierre grows his vegetables like his father before him, his father’s father and his grandfather’s father before him.

Because in the Gratadour family, they’ve been market gardeners for four generations and they’re proud of it. ‘My father was one month old when my grandparents and great-grandparents settled in Le Haillan.’ That was in 1944, the family came from Taillan-Médoc, a nearby community, and set up its market gardening business on about ten hectares of fields and streams. ‘Now, there are only 20 to 30 market gardeners left in the Bordeaux metropolitan area, in 1969 there were 400. It’s not true that we’re urban famers, we’re farmers who got urbanised! That’s totally different!’

Slightly disillusioned, Pierre explained how 3.5 hectares of land was taken away from his family in the 1970s to make a road, then once again 3.5 hectares in 2001 for a roundabout. Pierre still has 3.5 hectares where he grows a wide variety of vegetables to sell. He has done some counting: every year, nearly 70 kinds of vegetables are planted, i.e. around 100 different varieties. Never soilless cultivation ‘I checked it out. I said no.’ Unlike his father who started working at 15, Pierre graduated from a vocational high school then went on to do a technical degree in vegetable farming. ‘Just because you’re a farmer doesn’t mean you don’t need an education’ he insisted.

The man who said no to conventional farming

In particular, after being trained in conventional farming, he said ‘I didn’t want that’, and chose to go down a different path: crop rotation so as not to deplete the soil, seasonality to observe the rhythms of nature, use of plant compost to respect the soil, beehives for pollination, and a lot of different varieties for a pleasant change of taste.

‘As for lettuce, I grow 13 different varieties.’

Same goes for zucchini, eggplant, potatoes or tomatoes that display their differences in a tangle of greenery and insects. ‘If you listen to nature, you can grow anything’ said the man who defines himself first and foremost as a farmer. ‘I say hats off to organic farmers; but if everyone showed respect for the land and nature’s rhythms, we wouldn’t need that kind of label. And that’s the man in the street talking, not the farmer.’ He went on to say, ‘Sometimes my wife says I don’t separate professional and private life enough’.

That’s the way Pierre Gratadour is, committed on all fronts: ‘I’m against growth, consumerism is not what life’s about’. For that matter, he knows the topic inside out. His hands waving, in a sing-song accent, he reels off a list. His car? It’s 25 years old and takes him everywhere he wants. His tractor? It’s 51 years old and used to belong to his grandfather. ‘I’m a man of the people. I’m in a low-income bracket. And even though we aren’t rich, there’s only good produce on our table.’ His produce of course but produce from his farmer friends who belong to the farmer network ‘Le goût de notre ferme’ that several of them founded a few years ago. What’s more, he houses some of them in the shop located right on his farm, where he sells all his produce and organises farmers’ markets twice a year. ‘I only sell directly to the customer. That gives me immediate feedback and lets me tell customers about the seasonal and climate variations, and how they need to eat what’s available when it’s available, and how vegetables at any price year round are forbidden!’ Then he adds: ‘In the summer, when customers come rushing like crazy for my tomatoes and they say ‘oh la la, what beautiful tomatoes you have’, that’s my reward.’ Pierre Gratadour is a happy farmer who smiles as he watches a pigeon fly across the blue sky.