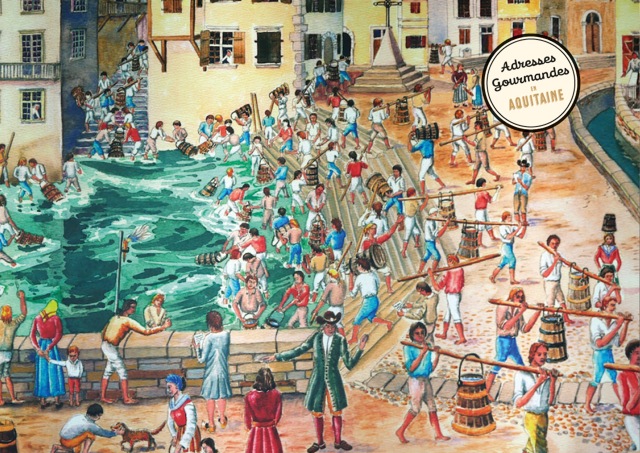 A city with no shortage of salt
By Sonia Moumen

Someone who thinks that salt production is only something to be found in the salt marshes on Île de Ré or in the Camargue would undoubtedly miss out on the salt produced in the heart of Béarn, in Salies-de-Béarn to be precise. A pretty little town, suitably named, located in the Bearn piedmont plain, that has been known for centuries as a must-see ‘Citadel of Salt’.

Here, there are no seas or oceans that come to deposit their grains of salt day after day via complex hydraulic systems. Instead, there’s a salty underground spring just a few kilometres away. Simply put, once upon a time, a long time ago, the boreal sea poured out its waters before slowly evaporating and leaving behind large amounts of salt. Then, there was a time when that salt was progressively covered up by a layer of protective clay that, it is said, kept the salt from being polluted. And then came the formation of the Pyrénées mountains, with their huge faults that caused the salt to rise. And then came the rainwater that seeped into the ground, thereby dissolving ‘the precious salty rock’ and leaving behind trace elements. Considering that in Salies-de-Béarn we are as chauvinistic as elsewhere, we make claims of springs with ‘unique mineral wealth’ and water ‘richer in salt than the Dead Sea but also ten times saltier than seawater.’

‘The miraculous source’ was exploited long before Jesus Christ

Legend has it that the salt deposit was discovered when a boar was trying to escape from hunters. The stalked boar ‘took cover in a muddy swamp where it was wounded by the hunters. It then dashed off and died in the distance. They tracked down the boar and found it covered in salt crystals produced by the water evaporating from the bog. The discovery of that salt pool is what led to the establishment the town of Salies.’ In fact, historians trace the origins of the citadel much farther back, to the Bronze Age (1500 B.C.), in an era when Salies-de-Béarn salt was already being extracted by the evaporation of saltwater in ceramic jars. Regardless of the genesis of the tale, one point is indisputable: Salies has grown economically, socially and culturally due to and for salt.

What other city can boast of having had a fountain of saltwater at the heart of its development for centuries? What city can lay claim to a charter written in 1587 by the inhabitants themselves to oversee the use of the famous Saltwater Fountain. Recorded in the Black Book, the nine clauses stipulated how the saltwater was to be shared between ‘neighbours’: water could only be taken by ‘real’ Salies families and the right was handed down from generation to generation according to strict conditions related to jus soli (by blood) and jus sanguinis (by blood), in particular. For that matter, reading the text from that era is enlightening. For example, it says that ‘any head of household and family, married or to be married, with or without children […] draws his quota of saltwater as the head of a household and family, observing the ancient order according to which the heads of a household helped themselves first’ or ‘that the men, women, servants or maids may not draw any part of the said water, even if, by tolerance or surprise, they have already taken some, so long as they remain in the above-mentioned state of servitude […]’.

An archaic system still in effect

And although the vocabulary and society have evolved since the 16th century, and the original spring at the Place du Baya� is no longer used and has been replaced since 1840 by the Queen Jeanne d’Ora� s spring a few kilometres from the town centre, the strange system is still more or less in use today: they’re called ‘Part-Prenants’, and are a bit like shareholders, 500 families in all, who are owners of both the thermal baths and the salt works. They have been sharing the income from the salt works for five centuries even though they are not the ones directly operating the godsend. Every year, each stakeholder receives a symbolic cheque for €50. An odd system for saltwater that definitely has little in common with its cousins produced from salt marshes, because the Bearn salt is exploited two ways. First as food-grade salt, then for its therapeutic virtues in paediatrics, gynaecology or rheumatology. On one side the salt works, on the other the thermal baths with their very 19th century charm. For that matter, pipes link the two facilities together: once the salt is removed for food uses, the water is sent to the thermal baths to be used in spa therapies.

And although the thermal baths are architecturally-speaking the most worthy of interest, extracting food salt is still quite impressive: in the open air, a pool of turquoise water from which hot steam rises. A steel jaw dipping down into the water, seeming almost unreal, it is so bright, as if lit from the inside. On the surface of the water, a thin, delicate crust of salt petals form. The renowned ‘fleur de sel’, both lightweight and immaculately white. At the bottom of the pool, lies the coarse salt. Using the two salts, drained and dried for three months, the Salines salt works company has developed a range of natural and aromatic salts, not to mention the mother liquors (for therapy) and the main market: coarse salt is used for curing Bayonne ham. The specifications require it! No, the Bearn salt works definitely have very little in common with their cousins from the ocean and the Mediterranean.