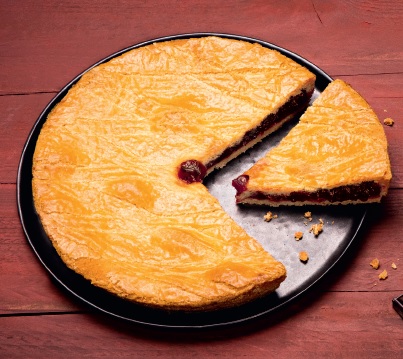 All good pastry chefs will have them for sale. Having been picked up again by factories, you will also find this cake in supermarkets.

The king of Basque pastries, Basque cake has established itself as a symbol of gastronomic heritage. Its success is owed to its biscuit-like, crunchy outer layer and traditionally creamy filling (or black cherry jam). Likely to have originated from Cambo-les-Baines, this cake is now widely produced beyond the city’s borders. Whether filled with cream or cherry, allow yourself to be tempted by this cake which is a true gem of the Basque Country.

There is an association dedicated to promoting High-Quality Basque Cake, Eguzkia.
Established in 1994, on the initiative of around twenty pastry chefs, the Eguzkia association highlights the value of the genuine Basque cake. With this aim in mind, the association has created specifications (filed with the national patent office) which cover, as a minimum, the use of natural raw ingredients and the definition of a traditional recipe (flour, butter, sugar, fresh eggs for the batter; milk, fresh eggs and sugar for the baked pastry cream) which each of its members commits to respecting. Recipes and list of pastry chefs at: http://gateaubasque-eguzkia.fr/