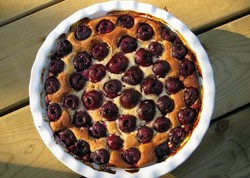 One of the country’s true children, the cherry clafoutis is an unmissable dessert: a soft dough scattered with cherries (morello cherries, guindous cherries, bigarreau cherries, large black cherries), which should not be stoned as the pit provides a subtle flavour during preparation. The clafoutis is served sprinkled with icing sugar on the plate it is cooked on, a varnished or enamelled terracotta plate.

It is round in shape with a rustic look. It doesn’t have to be stylish: a good clafoutis rises during cooking and inevitably falls again when cooled. It has a soft, light texture. All of the clafoutis’ flavour lies in the contrast between the soft dough and the cherry juice. Historically, the clafoutis was put in a bread oven after a batch of bread had been taken out.

The clafoutis is a traditional home-made dessert.