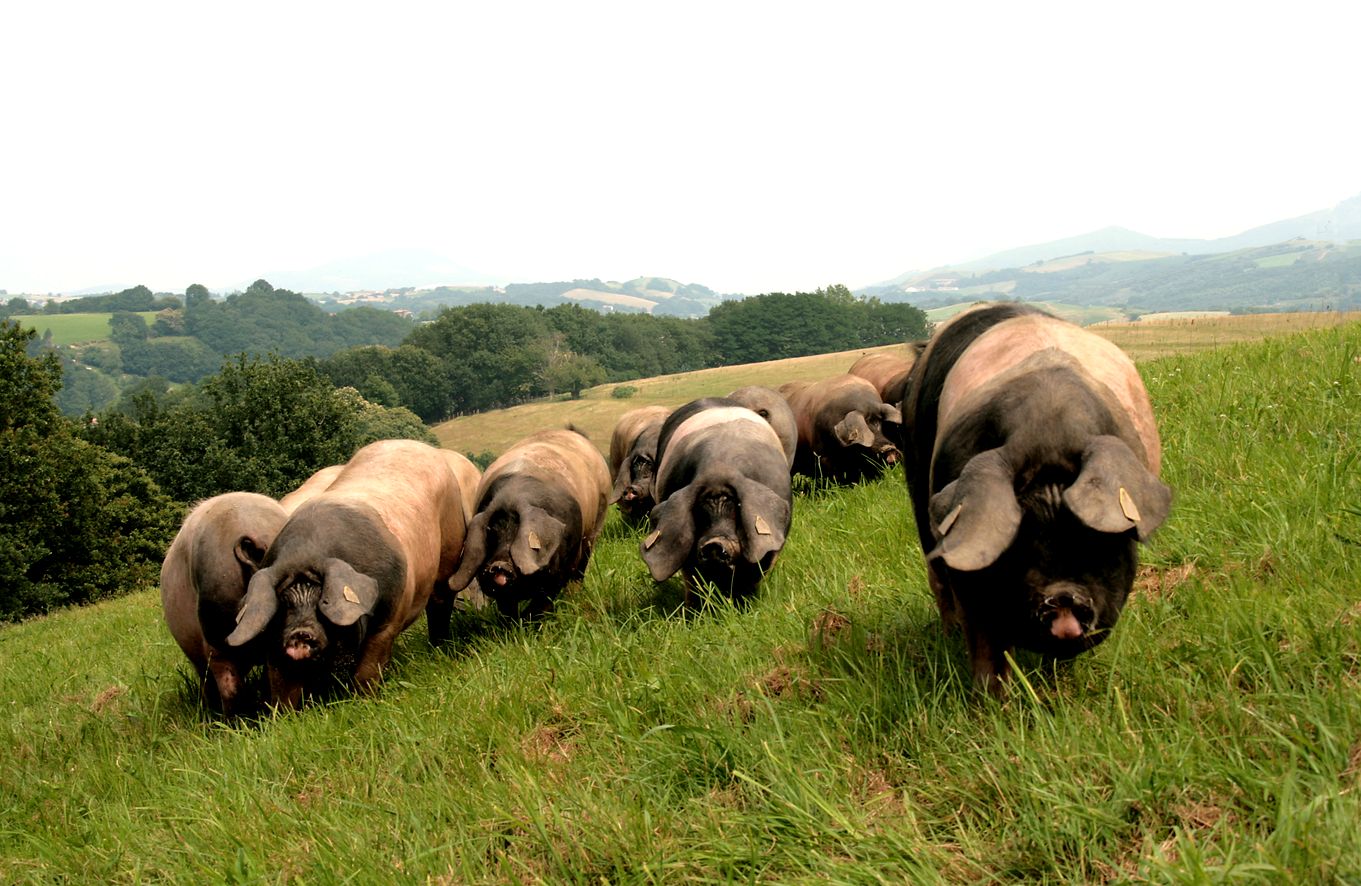 List of sales points from the Basque pork industry.

Basque pork (or Euskal Xerria in Basque) is one of 6 local French pig breeds and one of the oldest in Europe. Like the others, it almost disappeared in favour of more productive, so-called ‘classic’ breeds (Large White, Landrace: pink porks). Through both its agricultural and cultural heritage, Basque pork has strongly influenced the development of Basque society throughout history. Since the 12th century, its farming has caused economic growth and population of an area located in the heart of the Kingdom of Navarre (now Aldudes Valley) named ‘Kintoa’. This area takes its name from the tax which kings deducted for pigs which were brought there from across the Basque Country via transhumance.

Throughout the 19th century, heavy deforestation was carried out in the Basque Country so that the land could be used for ewe pasture lands. The number of beech, oak and sweet chestnut trees in the area declined, leading to fewer paths available to the pigs. Pork farming then moved from the mountains to the plains, near fast-growing towns.

Newly introduced British breeds (Large White, Landrace) with superior production performances accelerated the decline of Basque Pork. Declared endangered in 1981 by the Minister of Agriculture, this breed survived thanks to a handful of farmers who worked hard to develop mountain farming and who were committed to safeguarding their shared heritage.

Supported by the Technical Pork Institute, who took a census of the last living numbers, a group of around ten farmers joined forces around Pierre Oteiza, a meat producer in the Aldudes valley. Their goal was to work with Basque pork and turn it into a tool for development. This association is now the Basque Pork Industry. From just 10 farmers in the beginning, there are now 70. The last 50 females counted in 1982 were especially pampered and there are now around 350 sows. The 2000 piglets that are born each year are raised for over a year in a free-range setting on the mountainous, wooded land of the pyrénées.

It is the quality of Basque pork’s meat that gives it its reputation as a Kintoa designation product. Slaughtered at a late age, the meat is a deep red colour and is slightly marbled. It is tender, succulent and emanates flavours of nuts and roasted spices. The highest quality part, the ham, is dried and matured in the open air for over a year, taking advantage of the change between warm southern winds and sea air breezes from the ocean.

The two decrees approving the ‘Kintoa’ PDO and ‘Kintoa Ham’ were published in the French Republic Official Journal on 5th August 2016. The PDO was made official by Kintoa on 21st October 2017.