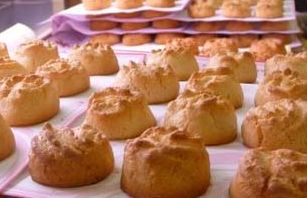 This delicious little biscuit originated in Italy at the dawn of the Renaissance. It is traditionally made in different shapes and sizes in at least a dozen French cities. But since 1920, the family company Rannou-Métivier in Montmorillon became one of the most famous macaroon manufacturers, continuing a tradition which is older than the city itself (17th century, if not earlier) but also the tradition of the Lusignan or Lussac-les-Châteaux macaroons.

The macaroon is undoubtedly part of Poitou’s gastronomic heritage, the Montmorillon pastry shop has even dedicated a museum to it. There is nothing simpler than a macaroon: flour, sugar, egg whites and, naturally, powdered almonds. It all lies in the way the eggs are beaten into peaks and then added to the other ingredients. Every year, Rannou-Métivier, as well as many other pastry chefs who sell macaroons, has a wide variety of flavours on offer.