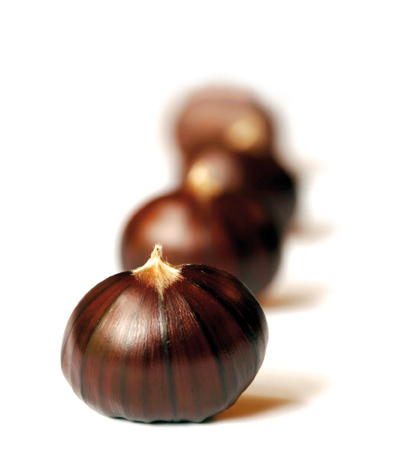 Mainly sold fresh, you can buy Périgord chestnuts on markets when they are in season, or from supermarkets.

There are two areas in France that produce chestnuts: the south east and the south west. Unlike the south east, the Périgord-Limousin regional park benefited from a greater revival in chestnut production at the turn of the century, and benefited from the new varieties created at that time.

For almost 30 years, the traditional chestnut groves have been progressively abandoned in favour of chestnut orchards, with specially selected varieties (mainly Marigoule and Bouche de Bétizac) and a production method that leaves nothing to chance.

Chestnuts have a white flesh that is not attached to this thin beige, bitter skin.

The producers and organisations responsible for selling Périgord chestnuts wanted to ’guarantee the quality of their product with respect to customers by creating a collective trademark’ Marrons du Périgord?.

The Label Rouge for this chestnut was approved by the French Ministerial Decree of 21st September 2015. This label is used to differentiate and represent the quality of chestnuts produced in the south west. Only the best chestnuts with a calibre of more than 31 mm of the Bouche de Bétizac, Marigoule and Bournette varieties can be certified Label Rouge chestnuts. The first Label Rouge chestnuts were sold as of 2016.

A recognition procedure for a Protected Geographical Indication (P.G.I.) is also underway for the Périgord chestnut.