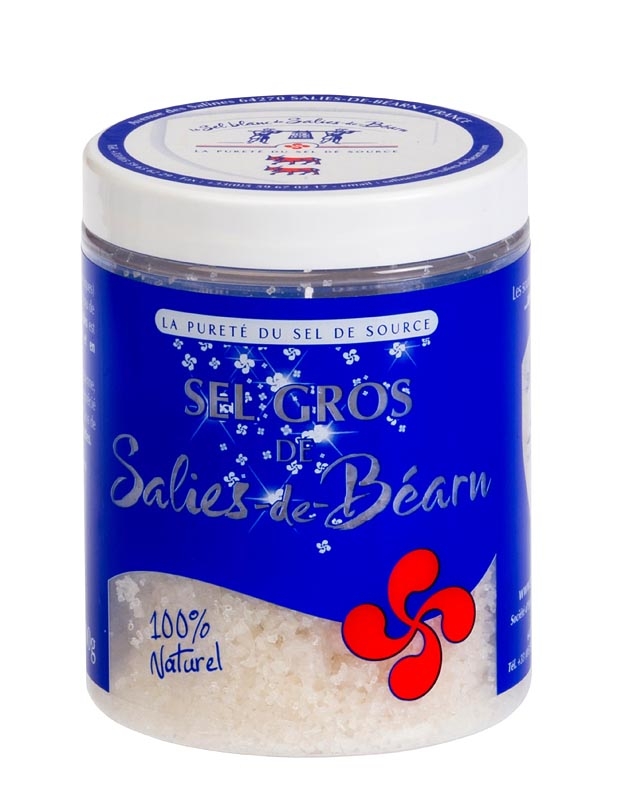 In supermarkets, luxury delicatessens, at the Espace Muséographique des Salines de Salies-de-Béarn and the Maison du Jambon in Bayonne.

Farmed in Salies-de-Béarn (Pyrénées-Atlantiques) since the Bronze Age, Salies de Béarn salt is a naturally white salt which comes from the salt water in the bay of Salies de Béarn. This water contains over 300 g of sodium chloride (salt), 10 times more than standard sea water and equivalent to that found in the Dead Sea. After more than 200 million years of stagnation in the depths of the earth under 5000 metres, it reappears in a pure state, charged with oligo elements as well as halophilic bacteria.

Just like the water from which it comes, Salies de Béarn salt is rich in mineral salts with oligo elements and halophilic bacteria (the precursor to vitamin A).
Using traditional methods, Salies-de-Béarn salt is obtained through a simple evaporation process of underground waters:
It is produced through a natural process with no chemical treatments applied. This is a 100% natural salt which is formed by crystallising salty spring water evaporation and heating it in open-air stoves.

This process is identical to the original one. It largely draws on elements of traditional farming techniques that have been employed for over 3000 years.
This process respects all the qualities of spring water, enabling all the richness to be conserved.

Traditionally used for cured products, Salies-de-Béarn salt is an essential element of cuisine in the South-West of France. Rich in mineral and oligo elements, it will enhance all the flavours in your dishes. What’s more, it is the only salt used for curing Jambons de Bayonne IGP.

After the salt has been collected, mother liquors are formed from the evaporation of water drawn from salt sources. Mother liquors are very rich in magnesium and oligo elements.br />
This concentrated thermal water has great medicinal and veterinary properties.