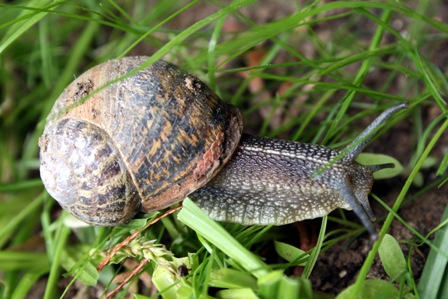 When to find it? All year round
Contact APEPC (Association des Producteurs d'Escargots du Poitou-Charentes)
86963 FUTUROSCOPE

Snails have appeared in the human food chain since prehistoric times. Shells, found by archaeologists in caves inhabited by our ancestors, show that snails were being gathered to eat at that time.

Snails were kept alive. During the Middle Ages, snails were stored by monks during the season to eat when food was short. From the 19th century onwards, snails became a commercial commodity. They started to be farmed at the beginning of the 20th century.

Poitou-Charentes is the No.1 snail farming region in France.

The production area for the ‘petit-gris’ or garden snail is located along the Atlantic coast. Production runs from April through to September.

Produce is sold living or processed. Although easy to gather, snails were hardly eaten by poorer communities in the late Middle Ages. Since the Antiquity, where the Romans introduced ‘cochlearia’ gastropods, snails began to be considered as a dish of the rich and wealthy. In 1507, Nicolas de la Chesnaye declared them to be the meat of noblemen and gentlemen. However, from the 17th century onward, snails were no longer being served as a delicacy and they seemed to only be used in certain regions, particularly in the East and South-West of France.

The petit-gris became so popular in the region that it is used as an emblem of the Charente, more commonly known as ‘Cagouillard’; ‘Luma’ or ‘Cagouille’. These differ from large snails – known as Burgundy – which originate from the Alps. The region’s ‘petit-gris’ benefited from a snail trend which took Parisian gourmets by storm in the second half of the 19th century. Appreciated by gourmets again in the 20th century, snails started to feature in many gastronomic guides.

They are served in broths, stuffed with garlic butter (this is the traditional Charentes recipe) and in sauces for Cagouilles � la Nage as well as the celebrated Lumas du Marais Poitevin sauce to which particular virtues are attributed, notably long life.