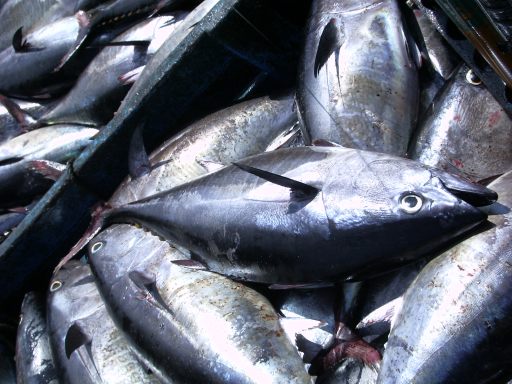 (c) CIDPMEM 64
Where to find this product?

A number of Basque ports have built their reputation based on tuna fishing. Tuna is fished at sea throughout the world and is also caught in Aquitaine, the largest specimens reaching 3 metres in length and weighing up to 400 kg. Fishing for this fish is a traditional activity mainly carried out from the port of Saint-Jean-de-Luz/Ciboure where two different species are landed: blue fin tuna and white tuna, also known as albacore. The albacore’s clear flesh and the pinkish-coloured flesh of the blue fin make tuna a particularly popular dish. Blue fin tuna is available from June to the end of September and white tuna from June to November.

Blue fin tuna is a pelagic fish. Swimming in schools in surface waters (between 0 and 50 m), it makes long migrations between American waters, the Bay of Biscay and the Norwegian coasts, in order to stay in water temperatures of 12 to 25°C. This predator, up to 3 metres long weighing up to 600 kg, hunts small pelagic fish such as anchovy, sardines, mackerel and squid. This highly prolific species reproduces between May and July and can live for over 40 years. It has a fusiform body with a bluish back and lower flanks, and a silvery white belly with some transverse lines.

Blue fin tuna is traditionally caught with rods in the Basque Country. After spotting a tuna matte on the surface of the water, the technique consists firstly of fixing the school under or near to the boat by throwing an abundance of live anchovy, sardine or horse mackerel bait which has been previously fished and landed by the vessel.

The fish are then hooked vigorously using 3 to 6 m long rods baited with small fish. Throughout the fishing process, tunas are drawn to the surface by stimulating them with water jets sent out from the boat. These water jets also mask the fishermen’s activity on the vessel.

This traditional fishing method can handle smaller size fish from 6.4 to 8 kg, depending on the length of the boat. Most catches weigh between 10 and 25 kg, the ideal size for fish cut by fishmongers and restaurateurs.

To cope with global overexploitation of blue fin tuna that became apparent in the 1990s, a set of management measures has been put in place, along with strict controls introduced in the mid-2000s. In addition to restrictive fishing quotas, specific rules have been put in place by the ICCAT* to restore stocks and allow the this resource to be farmed sustainably. These included limited fishing periods, fishing license quotas, minimum sizes and tail tagging of each fish with a numbered ring. All of these restrictions are still in effect today and strengthening controls at ports have contributed to growing this stock which has consistently been on the increase since 2009.

*International Commission for the Conservation of Atlantic Tunas