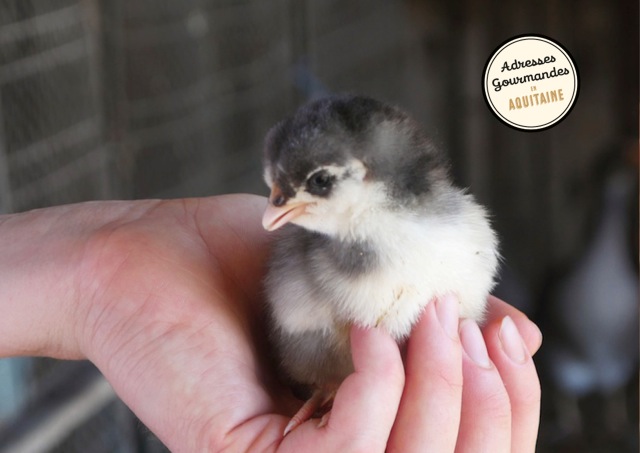 The great taste of the old breeds
By Sonia Moumen

With the high tops of the pines and leafy deciduous trees scraping the clouds and a carpet of thick ferns beneath your feet, welcome, you are at Domaine de Jarry Conservation Farm, in the heart of the Landes, criss-crossed by a thick forest and where, for several years now, local and ancient breeds once in danger of extinction, have been revived: the Landaise sheep, the Gascon pig and the Gascon hen. Isabelle Ortusi, 36 years old, with a bright expression and a luminous smile reigns over her little flock safe from major industrialisation of tastes.

The young woman radiates calm and happiness, also evident in her gestures as she bottle feeds lambs that are still feeble, or the way she deals with her powerful sows and their new born piglets, barely four days old. You have to go and say hello to ‘the mums’ and offer them a treat from last night’s dinner table. The ingredients for a feast, with (Gascon) chicken bones and fat, melon, mango, and above all lots of stroking and cooing and scratching. The sows are drooling with happiness and they hustle and grunt, kicking up clouds of dust. Isabelle laughs happily ‘thanks to them I have to do two loads of washing a day!’ before continuing ‘Aquitaine, is the cradle of the Gascon pig breed. In the 1980s they were practically extinct. A conservation programme has managed to save the breed’.

Saving the Gascon pig
And if Isabelle was just a little girl at the time, she has certainly done her bit since then. Apart from her investment in the Aquitaine Rare Breeds Conservation Society, since 2013, she has been treasurer of the National Association for Protection of the Gascon Pig. A pig with distinguishing features, including a completely black coat, a line of hard bristles along its spine, wide drooping ears that partially cover its eyes, and a hefty size, weighing in at 250 kg for the females and 350 kg for the boars. If the Gascon pig has a very particular appearance, it is its taste that interests people, with its marbled meat and good fat, the result of slow growth in the fresh air. Isabelle has chosen to produce suckling pig which she sells at 6 to 8 weeks, when they weigh around 8 to 12 kg ‘cooking it is easy as pie’ and when asked why she does not process the adult sows she replies ‘nothing is simple when you don’t live in a processing area like the Basque Country, where there is a whole industry. I am going to try it out, it but I will probably have to go all the way to the Gers to slaughter and process the meat’. Isabelle is not in a hurry though.

She has all the time in the world to process her sows, like life in general, like when before she became a pig breeder in this little corner of the Gironde, wedged between Bordeaux and the great forest of the Landes. Isabelle, with her flawless skin and clear gaze was born in Kenya, where her mother worked at the French Embassy, then she went to Somalia, ‘communist’ Hungary, Ireland Canada, and she ended up in Nantes, then Bordeaux. Having studied marine biology at university, she specialised in currents and ecosystems, and got her first job as a researcher, investigating eel migration in Aquitaine. Having previously qualified as a diving teacher, she chose to teach underwater diving and to work in the specialist department of Décathlon. An intense experience which she put an end to, without much soul searching, ‘business on that scale, was not really my world. I am very down to earth.’

The Landais sheep as it was in the time of Félix Arnaudin
In the meantime, the young woman met Michel Mouton, a university student who chose to settle in Cestas 20 years ago and to set up a small farm in order to preserve rare breeds, and for his own personal consumption. They married and went around the world diving for a while and then slowly developed the stock farming. ‘Werecovered flocks of Landais sheep that were endangered; country farmers who were retiring or whose animals were too interbred.’ Isabelle champions the Landais sheep in particular. ‘On 19th, you only had to look at Félix Arnaudin’s photos, there were millions. It is a rustic breed which makes the most of poor terrain like that of the Landes. They have something of the goat about them. The problem is that they are neither good for milk nor meat! I had to find an outlet.’

And came up with milk-fed lamb sold deliciously tender at 7 or 8 weeks. And with Gascon hens, that like to perch in the tree tops, the young woman has found another outlet for her cockerels, which mostly roamed around the farm before going into the pot. ‘These are real competition cockerels! This is not a roasting fowl because the flesh is too bony! I sell them to private clients who like the old-style recipes, such as coq au vin, poule au pot, slow cooked stews served in their sauce. I like to prepare them in sauerkraut, or in a tajine or curried’. And if there are a few leftover bones to gnaw, you can always keep them for the pigs who will enjoy them.