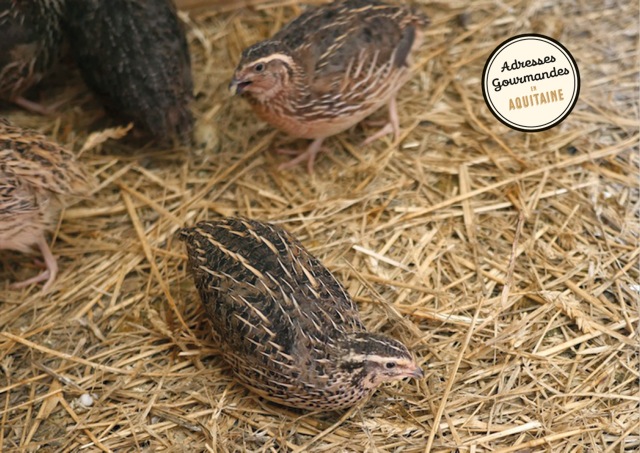 No sooner has he shaken your hand than he’s already started telling you about his little feathered friends that he enjoys raising: ducks, quails, ducklings, capons and poulardes… For each of them, Pierre Duplantier can reel off specifics, because at age 49, he has always known that, in terms of poultry, not every production method nor every breed is equal.

And it was precisely because he knows that his chickens have something extra than the ones raised by other farmers, that 15 years ago, he reached out to the chef Arnaud Daguin in Biarritz at the time: brazenly, he offered the chef the chance to taste one of his poulardes. Not something the general public is always familiar with, poulardes are fattened up for 20 to 21 weeks, first fed like free-range chickens, then ‘finished’ on milk in a darkened fattening shed. The famous gastronome Brillat-Savarin who Duplantier quotes with pleasure, used to praise the plump poultry as ‘the Queen of poultry, the poultry of Kings’. In any case, Arnaud Daguin was delighted, recommended Duplantier to the great chefs he knew and gave him a few tips that the Bearn-native has never forgotten: ‘Provide quality, not quantity. Avoid trying to be everywhere.’

Two years later, it was 2002, the Duplantier name has started popping up on menus in major restaurants in the Southwest and in Paris. He decided to register his trademark. He kept it simple: ‘Les poulardes de Pierre Duplantier’. Since then, the 4-star poultry farmer has started raising semi-wild ducks, a cross between a mallard and Khaki-Campbell‘ a little duck for two that’s very popular’; and Rouen ducks that he delivers to prestigious tables of chefs like Pascal Barbot or Alain Plassard ‘a rather big duck that is falling into oblivion, which is a real pity.’ He also raises a few Barbary ducklings, but measures his words: ‘not many though, everyone raises them.’

To stand out from the crowd and ‘because we couldn’t find anything worthwhile,’ in 2009 he started raising quail, like ortolans, ‘sounds pretentious, I know’ he laughs, before explaining how they are raised like tiny birds much to the delight of gourmets: the quails grow up in a darkened shed, and are fattened twice as long ‘4 to 5 weeks isn’t enough’, are fed with milk and get very special treatment when their time comes: ‘we don’t bleed them out, we smother them, then dry pluck them, like game birds.’ Like the rest of his poultry, the quails found takers among famous chefs right away. ‘It wasn’t out of snobbery that I contacted the chefs, it’s because I didn’t have the sales structure for the general public, I didn’t see myself going to sell at markets. Maybe some people are talented at that… Sure, I sell to private customers, too, if they call me and place an order.’

“Poultry birds are a kind of like a human society”

From his farm that overlooks the Bearn hills, with the Pyrénées mountain chain lining the horizon, alongside his spouse and 3-year-old son, Pierre Duplantier is content. So much so that he became mayor of the little village of Méracq, explaining ‘I do a little bit everything, mediator, valet, the guy who takes care of people.’ Then he went on, jokingly ‘you know, poultry birds, they’re kind of like a human society!’ From atop his hill, Pierre contemplates his poultry that frolic in the open air and reflects on how far he has come since he took over the dairy farm run by his parents, ‘ordinary farmworkers’. ‘The challenge for generations now has been to know if we can make a living from farming or not.’

’When I took over, we were doing Label Rouge chicken for retail supermarkets but that didn’t suit me. I had to re-organise the farm, the production methods and figure out how to sell in short food supply chains, I wasn’t boasting. But I didn’t steal anybody’s place, I just offered a product that wasn’t on the menus yet. No sense complicating things, when it’s good, it’s good.’ And it’s all that much better since he delivers his poultry to the chefs, trimmed and gutted, so they can dry-age the meat, sometimes up to two weeks: ‘poultry has to rest, it needs to age.’ Aged or not, he recommends stuffing his poularde with garlic croutons and rosemary then roasting it: ‘that’s what it was made for. It has skin that can stand the heat’, and why not serve it with a tian of veggies or a little purée ‘without too much butter.’ A real treat, even if he admits in a whisper, his gourmet smile and a twinkle in his eye, ‘personally, when I eat out, I tend to order fish instead.’