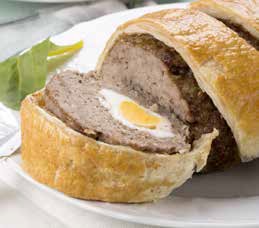 In some butcher’s, pork butcher’s and delicatessens in Nouvelle-Aquitaine.

This is made during Easter by all pork butcher’s in Vienne. It can also be found in butcher’s across other departments of the region. It is served as a pâté en croûte, which contains a pink-coloured stuffing with an egg in the middle whose ends are cut off so you can see the yolk and white. It is made from shortcrust or puff pastry, with veal and pork meat in various proportions depending on the manufacturer, fresh boiled eggs, Cognac, spices, salt and pepper. It is served cut into slices, tasty both cold or warm and is sometimes accompanied by a salad. In 1932, Maurice Béguin differentiated two types of pâtés de Pâques. The first, which is also called ‘goguenion’ or ‘gouguenioche’, is a savoury brioche which contains pieces of cooked poultry and eggs. The Niort pâté de Pâques is made from the same ingredients as the goguenion but, according to Béguin, ‘with pastry in the shape of a pâté en croûte’. The pâté de Pâques tradition is quite old and is said to have originated in the 1930s, or maybe before. However, the word pâté suggests that the ‘Niort’ shape is the oldest one. It closely resembles medieval pâtés which were always covered in pasta and often contained meat. That being said, although the pâté de Pâques is usually made by butchers in Vienne, during the 1930s, this practice was carried out across the whole of France.