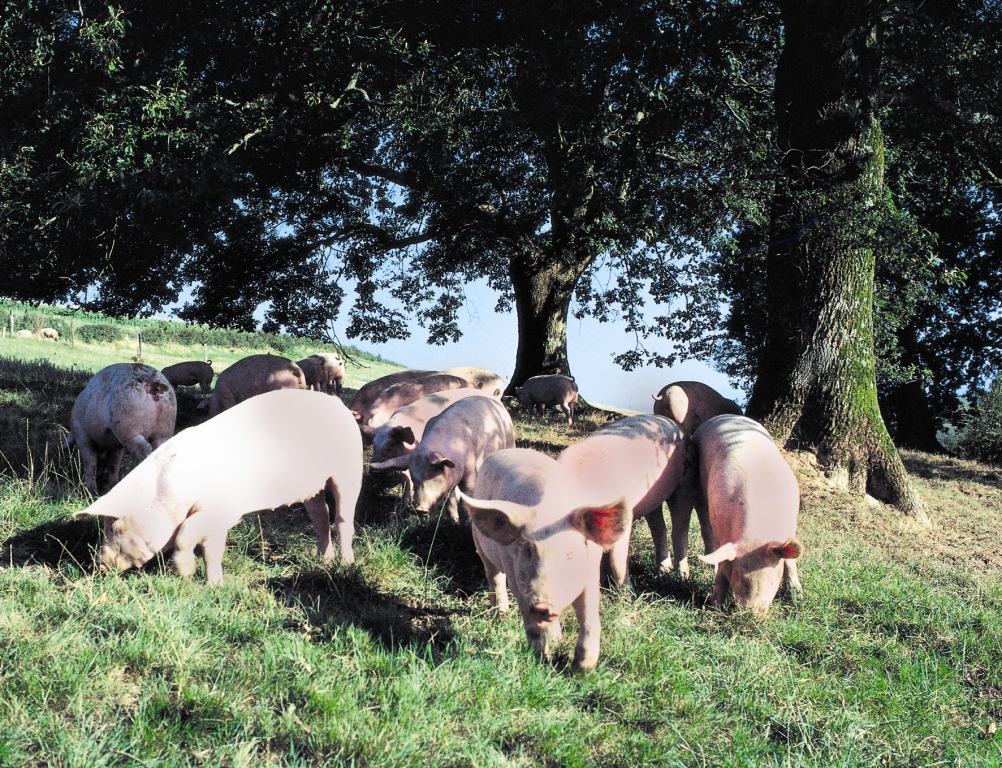 South-West pigs are born and raised in south-west France, comprised of 3 administrative regions: Aquitaine, Midi-Pyrénées and Poitou-Charentes.
South-West pork is distinctive because of its dual tradition: the pigs are fed on local maize and also produce a heavier pork. The farming conditions for this pork comply with very strict specifications and permanent controls.
South-West pork is sold as fresh meat and is also used to produce Bayonne ham, as well as South-West charcuterie and salted meats.
South-West pork meat is succulent and tender, with an intense flavour. It displays distinctive chemicophysical features; in particular, a high rate of unsaturated fatty acids (almost 60%):
– A strong proportion of mono unsaturated fatty acids (around 45%), oleic acid is very interesting in particular as it provides the same nutritional benefits as olive oil
– Polyunsaturated fatty acids (around 15%), especially linoleic acid (omega 6), which are essential for the human body.

South-West pork was officially awarded Protected Geographical Indication in 2013 (registered on 09/05/13 in the European Community Official Journal). This European recognition guarantees origin and quality for consumers.

Lean P.G.I. Bayonne Ham, Label Rouge South-West grain-fed pork and South-West Farmed Pork, this Fresh Meat P.G.I. adds to the general value of pigs which are identified as being from the South-West.

Two Label Rouge specifications are based on the South-West Pork P.G.I.:

South-West Farmed Pork originates from a traditional production region which has a mild and sufficiently sunny climate, as well as land suitable for free-range farming. The South-West is the number one maize-growing region in Europe and therefore has a top-end raw material available for feeding pigs. The pork meat is not fatty, quite the opposite. With an average caloric intake close to that of poultry (between 105 and 135 kcal/100g depending on the cut) and especially with its minimal fat content (3g/100g on average), pork certainly falls within the spectrum of a light and well-balanced food. Pork meat is not marbled, fat is very visible and therefore easy to remove. It should be noted that pork meat lipids are largely comprised of unsaturated fatty acids (up to 60% like chicken). These good fats help to prevent cardio-vascular diseases