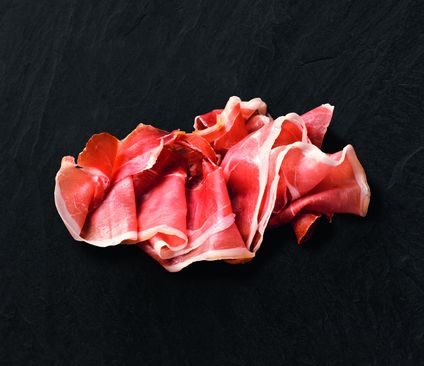 At retailers, supermarkets and, of course, from the Bayonne Ham Company’s online shop: www.maison-du-jambon-de-bayonne.com

Bayonne ham is made based on traditional manufacturing principles which reflect the savoir-faire of meat producers within the Adour basin. Throughout over a thousand years of history, Bayonne ham has graced the most famous of tables: Marguerite de Navarre, Rabelais, Henri IV… Beside the Atlantic and at the foot of the pyrénées, it benefits from exceptional natural conditions thanks to winds coming in from the sea or mountains, resulting in the famous foehn effect (warm wind and dry wind from Spain). Bayonne ham is salted using salt from Salies-de-Béarn.

The name of the ham comes from the place where it is marketed: this is beside the port of Bayonne from where hams used to be sent abroad. Indeed, Bayonne Ham is a regional product: the Adour Basin. The geological and climate conditions are especially favourable for salting the ham. The climate in the Adour Basin alters between dry weather from southern winds and humidity from the Atlantic Ocean. It lies between sea and mountain, beside the Atlantic and at the foot of the pyrénées.

During the different stages of ageing, Bayonne ham develops flavour and gains softness. Cut into thin slices, it is melt in the mouth, with a delicate and slightly salty flavour and a strong, traditional aroma due to its long ageing and maturing period (7 months minimum for P.G.I. and 9 months minimum for Label Rouge).

In order to preserve the characteristics and tradition of Bayonne Ham, the Aquitaine Pig Joint-Trade Organisation and the Bayonne Ham Consortium brought together all industry stakeholders and gained Protected Geographical Indication (P.G.I.) on a European level in October 1998. From then on, only hams that follow strict pig farming, slaughter and butchering conditions, as well as well-defined conditions for salting and drying the ham, can be called Bayonne Ham.

A well-defined farming and processing area

The production area for pork butcher’s falls within the regions and departments located in south-west France. This includes the 3 administrative regions of Aquitaine, Poitou-Charentes and Midi-Pyrénées, as well as the 5 bordering departments (Haute-Vienne, Corrèze, Cantal, Aude, Pyrénées-Orientales).

The processing area of Bayonne ham is defined at the geographical area in the Adour Basin, demarcated to the west by the Atlantic Ocean, to the south by the pyrénées mountains and to the north and east by the Adour river (including Adour’s peripheral cantons). The Adour Basin covers all of the pyrénées and Atlantic cantons, as well as the 24 cantons of Hautes-Pyrénées, the 3 cantons of Gers and 17 cantons of Landes.

Consumers have made the right decision in rewarding this guarantee with a fair price: Bayonne ham is the best-known and most frequently bought ham with the most loyal customers! (Bayonne Ham consumer study, TNS SOFRES, July 2006).